Advice from a neurosurgeon. 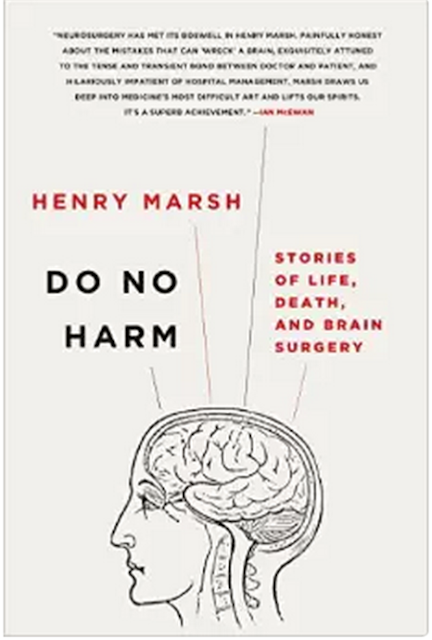 I just finished reading a book titled "Do No Harm: Stories of Life, Death and Brain Surgery," by a prominent English neurosurgeon named Dr. Henry Marsh. You can check out the book here.

Marsh divides his book into about 25 chapters. And each chapter is his account of a particular disease in a particular patient and his, often futile, attempts to surgically deal with his patients' ailments.

There were many things I found interesting in Marsh's book. Many things, not surprisingly perhaps, I found relevant to our business.

First is the imposition of management on people who already know how to manage. For the most part Marsh runs a pretty tight, if antiquated ship at his hospital. But then the government comes in and imposes its rules and order. Things go off the rails. There are, all at once, a surfeit of nonsensical signs telling people what to do and how to act. There's a grievous bed shortage. And, I would say, thanks to departments like "The Department of Criticism and Compliments" there's an HR-led autocracy that drives independent thinkers fairly up the walls.

All this, of course, is redolent in agencies today. The first thing I had to do when I joined my current job was "attend" two separate online courses. One on data security written at a fourth grade level on 20-year-old software. The second was on sexual harassment. This is how a senior creative is greeted nowadays. Not with a welcome memo, business cards, a free-lunch voucher and a balloon, but with the shrill imperative to eschew groping minxes.

Next came Marsh's admission that much of the surgery he performs is shaded by luck. There's skill of course, and experience, but a small slip, or perception error spells the difference between someone who recovers and someone who slinks deep into a coma.

There's very little, it seems, science in science. And, I believe, even less in advertising despite the proclamations to the contrary.

Finally, there's the need not to be scientific, but to be human. It's easy, I suppose for a neurosurgeon to hide behind a thick coat of jargon and bullshit. It's easy to spout a lot of medical terms and obscure a diagnosis. It's much harder, I think, to tell a patient that she's going to die in six weeks.

No real summation, I guess.

Stay away from management, if you can. Pray for luck. And try to be human.

It couldn't hurt.
Posted by george tannenbaum at 8:17 AM