I think a lot about the failure of our current economic system and its accelerating race to the bottom. I'll focus on the ad industry here, because it's what I know. But I'm about 97% certain what is happening in advertising is happening in just about every other industry, too.

It starts of course at the very top. With the people who run the holding companies and the people at the uppermost stratosphere of individual agencies.

These are the people who are driving those companies into the ground. Shattering entire industries and destroying lives. Because to them, everything is extractive. Wherever they work, they treat it like an oil well or coal mine. They extract the value, profit enormously and leave nothing behind but a slag heap. Reinvestment ain't for them.

But this post isn't about inequities in income distribution. What plagues our economy and our industry is more insidious than that. It's the great mismatch between talent and responsibility.

To get a job in advertising, you need to be ambitious.

You need to be passionate. You need to grab the gender-normative bull by the horns. The people the industry has historically attracted are those who want things yesterday. They're fast and bright and hungry.

But you can't be any of those things (and survive) if you work in an agency today.

Sure there are exceptions. People who are taken care of. But most people--even when they're young--have to wait 12 months or 18 or even 24 months to get something like a 3% raise (even though inflation hovers around 4%. Many people actually get real salary decreases every year.) As you get older, raises are even less frequent. And in many many cases, bonuses of any sort, especially for the hoi polloi, have vanished.

But not when it comes to their own careers.

Then, they should be docile, patient and afflicted with lassitude. "It'll come," we want them to say. "I'm lucky I have a job," is another corporate favorite.

No ball team, to strain a metaphor, signs on speedsters and then says, "don't take the extra base." "Don't steal second." "Don't stretch a two-bagger into a triple." No, you gear your team around the talent you have. And you acquire talent based on the kind of game you want to play.

If you believe in power--you find power-hitters. Speed and defense, you find little guys named Sparky.

In advertising, gearing people to their jobs is all out of whack. Big agencies act like the Navy--ponderous and process-driven. But they still hiring pirates. Then fire them because they don't fit in and don't follow the rules which are often retrograde and counter-productive.

I was talking to my long-time therapist early yesterday morning and he asked how GeorgeCo., LLC, a Delaware Company was going.

"Well, Owen," I answered. "I seem to have restored the relationship between hard work and pay. I bust my ass, work nine days a week, but I get paid for it."

Owen said something banal, "That's good," or some such.

And then I blurted this line. And that's where I'll end for the week. 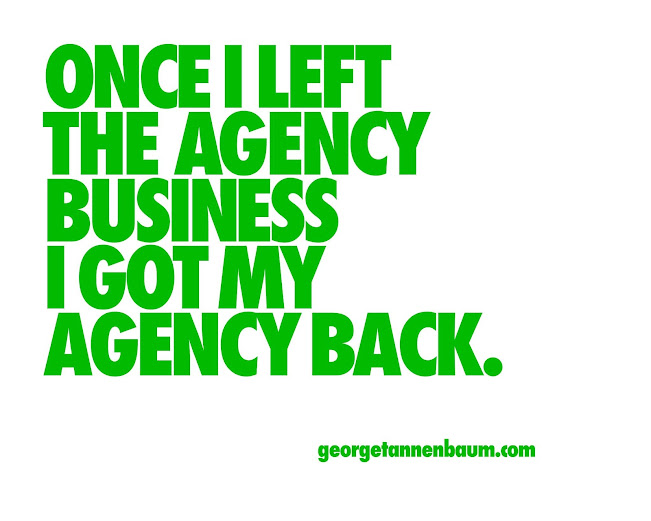 Posted by george tannenbaum at 4:01 AM