Latin, Brando, Economics and You.

This post is going to involve some basic Latin, Western legal frameworks and modern economics and marketing, so if your brain has atrophied entirely from too much cable news, too many laugh-tracks and too many lies that you can't deal with complexity, I invite you to skip the post. Tomorrow, I promise I'll write about something less grave, like sea levels rising up to 200 feet as both ice caps melt because we like pick-up trucks.

Let me start with Western legal concepts. The law, de jure, in the United States begins with the concept that people are presumed innocent until proven guilty. I say de jure of course, because the presumption of innocence is often abnegated if you're a person of color or doing something heinous like wearing a hoodie.

The Napoleonic code, the law in France and Louisiana, is different. It presumes guilt and innocence has to be proven.

I'm no lawyer--though I did okay on my LSATs--I decided to disappoint my harridan of a mother and not work for a living, but I understand the basics of that.

First, is the word sincere. Literally, it means "without wax." In olden days, wine-sellers would sell amphorae of wine. Unscrupulous ones, say the Raymour & Flanagans of Roman times, would coat the insides of their amphorae with wax. The buyer would get more wax and less wine. It was harder to get your drunk on.

If a wine-seller said he was sincere, it meant you were getting the genuine article--more wine than wax. A companion piece of this is Caveat emptor. In English, "let the buyer beware."

Rome, for all its advances in conquering the world and building aqueducts, had no legal system. The third of the population who were enslaved had no rights at all. And if a crime was perpetrated by or against someone with wealth, they would take it in their own hands to seek redress. There were no cops. Like in the Mafia, crime and punishment were a family affair.

In our modern world today billions if not trillions of dollars are being spent by giant corporations and politicians to convince you that they are good for the world.

Here's one example I found in the LinkedIn feed of someone I respect. 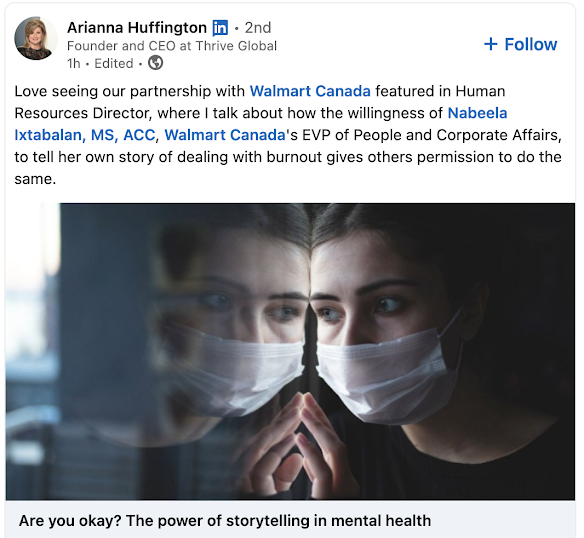 Arianna here seems to be telling us that Walmart (Canada or otherwise) are good folks because their EVP of People and Corporate Affairs is speaking out about the need for mental health.

You get this kind of bushwa everywhere. Nike makes the world more athletic and noble. Nothing about slave labor in their East Asian factories. Apple too. They make us creative. But they employ slaves in China and skirt billions and billions in taxes.

Here's where I attempt to weave all this nonsense together.

Your job as a citizen of planet earth, IMHO, is to regard people as innocent until proven guilty and corporations Napoleonically--as guilty until proven innocent.

I have no respect for those who "thumbs up" a petrochemical company like Chevron for spending $100 million on environmental research when their profit since 2018 adds up to just under $170 billion. That's like you having $1700, and giving one dollar to charity. It's all but meaningless.

It puzzles me, I'll admit, why we seem to hate our neighbors but admire the companies laying waste to our planet.

Most people claim to be unaffected by advertising and image campaigns and PR, but here we are applauding Bank of America--which almost destroyed the Global Economic System--earning applause for sponsoring Shakespeare in the Park. They paid off probably a half-a-trillion dollars of economic mayhem with probably $1 million or phony largesse.

I don't think the ad industry can do much about this. If Chevron offered me their $100 million account, or Nike or Apple, I wouldn't say no.

But I suppose if I were the Four A's, or if I were still teaching my children how to read, I'd teach them how to spot lies. It's important.

It's important to call out the lies people tell--whether they're giant corporations, a local dry cleaner, or the people who run the Holding Company that keeps NOT adjusting your wages for inflation because their profits are "razor-thin."

I expect corporations and executives to lie to me fairly regularly. That's ok, and really I'm ok with it. Just don't think I'm so stupid that I don't know that you're lying. I do.

I just can't do anything about it.

Posted by george tannenbaum at 6:20 AM