Here are just 10 or so pages of ads I've seen for one ad agency looking to fill creative jobs. They had 10 pages more or 20 or 30 that I didn't copy. I'm sure you get the point. 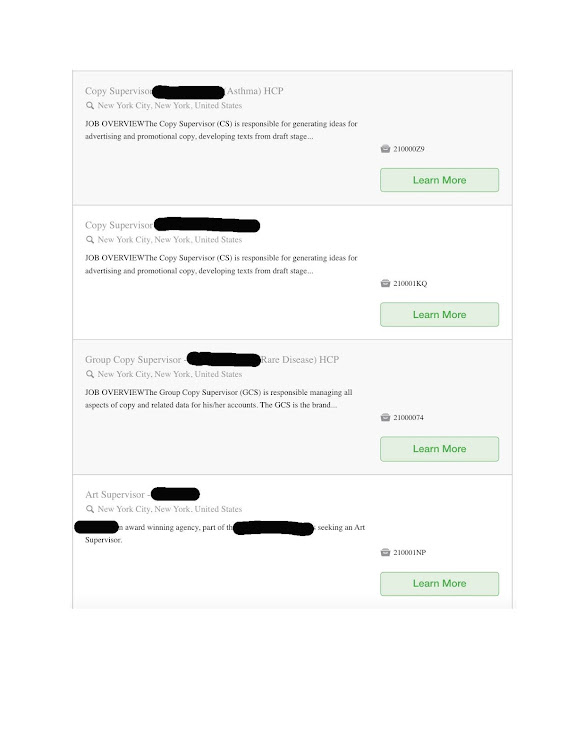 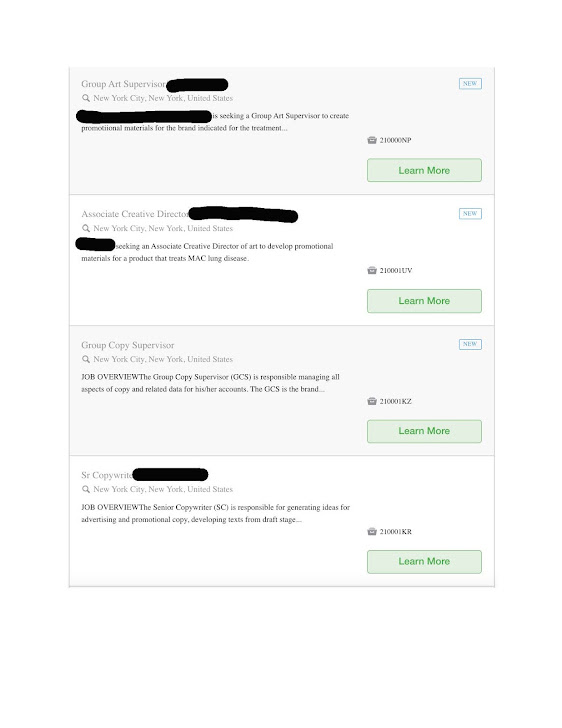 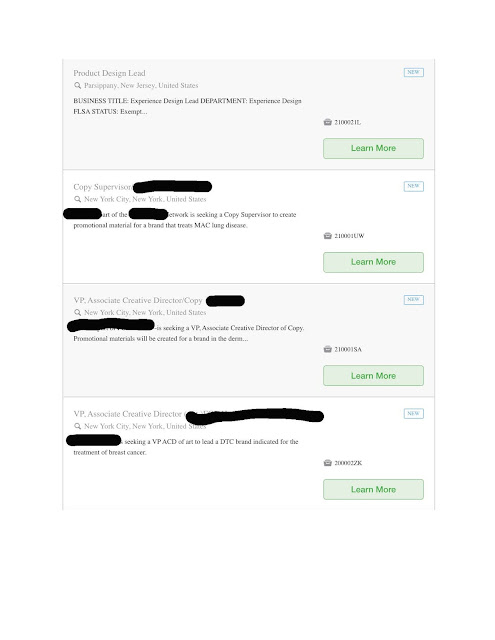 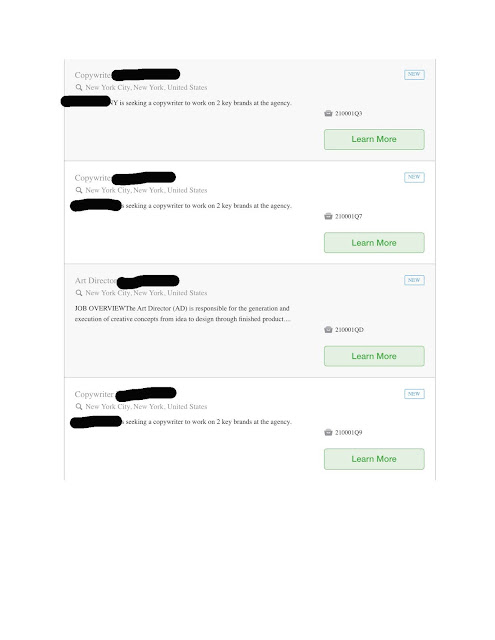 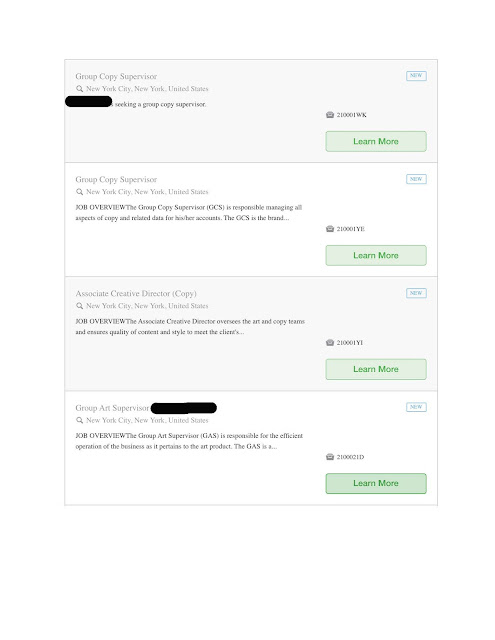 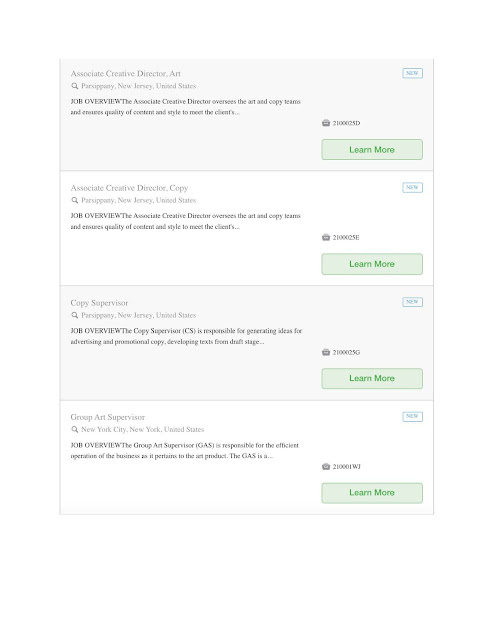 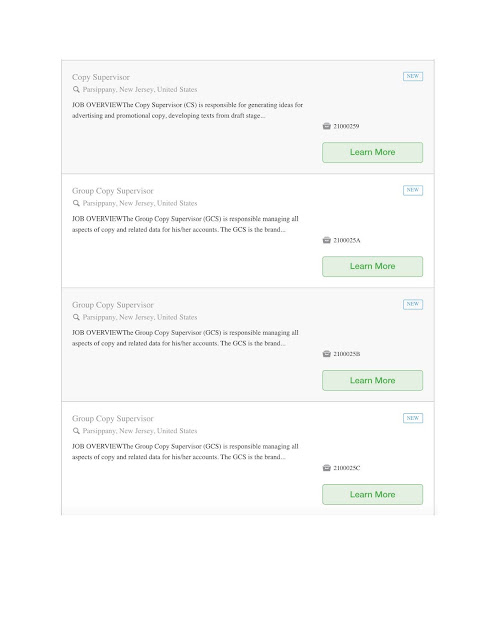 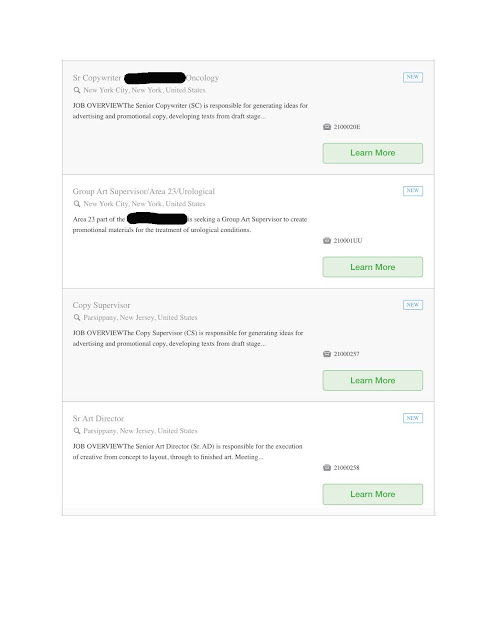 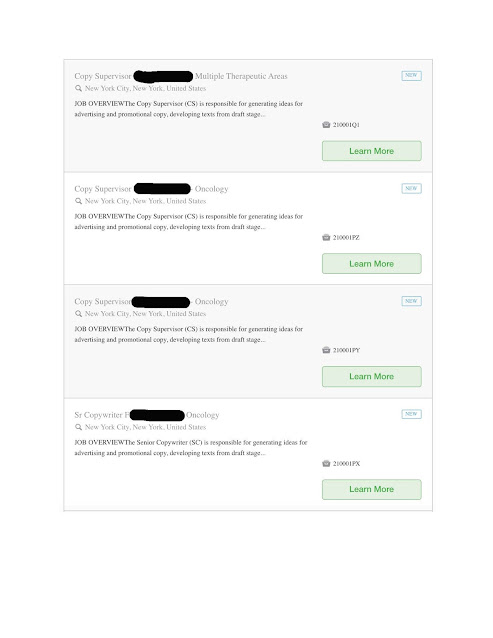 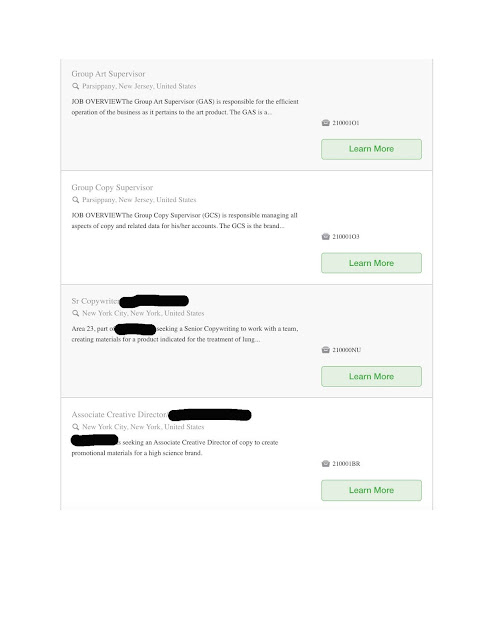 Over the past two days or maybe three, I've heard from about 97 different advertising recruiters.

I've made it quite clear since I was kicked to the curb by Ogilvy after being needed enough to work about 30 weekends a year, give up two vacations a year, lead two pitches a year and help run big accounts, that I was through with the agency business.

My epigram regarding Ogilvy was simple: I didn't leave Ogilvy. Ogilvy left me.

The values that helped the place grow were abided by no longer. The simplest, "first-class business in a first-class way," was probably the first to go. Second might have been, "to be most valued by those who most value brands."

Instead, the place became small and impecunious. It no longer worked to be important to clients. It worked instead to get awards and PR for itself.

"George," these calls usually begin, breathlessly. Sometimes I feel like I'm on the receiving end of a 911 call.

"Marsha," (I've known her since I was 26) "You know I've left the business, never to return. Agencies don't pay anymore. There's no job security. You work around the clock. And I'm making three-times my Ogilvy salary at GeorgeCo., LLC, a Delaware Company."

"That's fine. But agencies no longer pay a living wage."

"But, George. This is the big job. Do you know anyone?"

There is now some nervous laughter from Marsha. She tried to bring the heat down a few hundred degrees.

"No one said that, George, I just don't think Simon's right."

"No one said that," I said, "but everybody's saying it without really saying it aloud. But it's being said every day. I mean Simon's won more major awards than anyone I know. He's funny, smart, energetic."

"I have a feeling," I said, as I've said so often, "every little thing  you're saying is true. But they all add up to one big, fat lie."

This will probably get me in a shitload of trouble. But it seems to me that at least two things are afflicting the agency business when it comes to hiring and keeping people.

One is that the optics of hiring might be given more weight than the talent and the track-record of the person being hired.

Two, and equally egregious, is that holding companies have put downward pressure on wages and have worked together to keep wages low.

In a free market, a shortage of workers will drive salaries up. This is Adam Smith, the Invisible Hand and Paul Samuelson. Under the Holding Company oligarchy, it's not unusual for an agency (especially pharma shops) to post 75-150 job listings.

But wages aren't rising to attract workers. In fact, I think they're going in the other direction. Because, after all, when market power is concentrated in coordinated hands, it can suppress salaries.

If I needed someone to clean my basement, I might put a sign in my yard saying "Basement Cleaner wanted. $15/hr."

If no one answered the call, I might change the offered wage to $20/hr. If that attracted no one, I might go up to $30. Like I said, this is, essentially, the law of supply and demand. It's been abrogated in modern America.

There's something going on here that goes against most of what we were supposed to have been taught in kindergarten.

If smart people got together to chronicle the demise of a once-great industry--an industry that built the American economy into the greatest producer and distributor of wealth the world has ever known, they could probably identify dozens if not hundreds of reasons.

You can probably come up with a handful yourself.

But I think it starts--and yes, ends--with the reason I noted above.

Posted by george tannenbaum at 6:59 AM