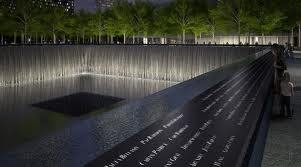 Last month I saw a You Tube video of George Lois speaking before a design and art direction group in the UK. Lois, as you would expect, excoriated 99% of all design for being banal, mere decoration without a larger, brand building idea. Lois' tirade was blunt and laced with various versions of the word 'fuck.' Fuck, fucking, fucker, mother fucker and probably a few more variations on a theme.

This weekend my wife and I traveled to lower Manhattan to see the new 9/11 Memorial, a tribute to the fallen people and buildings on that horrible day. (I happen to think the best tribute, better than the Memorial itself, is the two-dozen or so construction cranes that battle for air-space building new towers around where the old ones were destroyed. Positive communities build. Negative ones tear down. New York is showing itself a positive city.)

The architecture of the memorial is like the good art direction and design that Lois mentions. It is meaningful, not just pretty. It has a message.

The memorial is located on the land where the Twin Towers formerly stood. There are two deep, black granite pools and fountains where the foundations of each Trade Center were, with a deep, "bottomless" square in the middle--where the elevator shafts sunk to. Water cascaded down the walls, filled the pool, then lapped into the bottomless center. Around each square are displays that list the names of the victims of the Pennsylvania crash, the Pentagon crash, the Trade Center crashes, and the 1993 terrorist attacks in the World Trade Center.

In all, it was a memorable and moving articulation, made even more effective, I think by the wind and rain of the day.

My one complaint is that the crush of getting in, long lines despite the tickets you had to procure on line, and the unusually nasty and chaotic security disrobing, destroyed what should be, to my mind, a quieter, more solemn viewing experience. Further, the "Museum Shop" was as crassly commercial and sentimental as a Nigerian vendor in mid-town.

In all though, visit. If you're from out of town or not, as we used to say on the Dunkin' Donuts account, "it's worth the trip."
Posted by george tannenbaum at 7:23 AM