Doing what it takes. Whatever it takes. 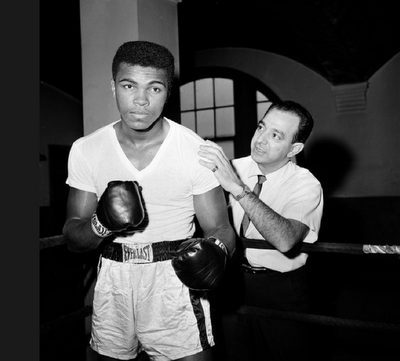 One thing that marked Dundee's success was his ability to think on his feet. The obit reports: "When Ali sought to regain his senses after being knocked down by Henry Cooper in the fourth round of their June 1963 bout, Dundee stuck his finger in a small slit that had opened in one of Ali’s gloves, making the damage worse. Then he brought the badly damaged glove to the referee’s attention. Dundee was told that a substitute glove wasn’t available, and the few seconds of delay helped Clay recover. He knocked Cooper out in the fifth round."

Another reason behind Dundee's triumphs was his ability to "read a room." "In the hours before Ali fought Foreman in Zaire in 1974 — the Rumble in the Jungle — Dundee noticed that the ring ropes were sagging in the high humidity. He used a razor blade to cut and refit them so they were tight, enabling Ali to bounce off them when Foreman unleashed his “anywhere” punches from all angles. Ali wore Foreman out, hanging back with the “rope a dope” strategy Ali undertook on his own, and he went on to win the bout."

Thinking on your feet, reading the room, and being smart enough to do whatever it takes is what it takes to succeed in brutal businesses.

And advertising.
Posted by george tannenbaum at 5:53 PM

Nice tribute to a great trainer George.
One pedantic point: I heard the Cooper/Clay fight over the radio in a chip shop when I was about 16.
Clay didn't knock Cooper out (in either fight) he opened a cut under his eye.
The fight was stopped on a TKO.
I had to correct George Lois last year on the same point.
We don't have many good boxers over here so we remember things like that.

Dave, have you read "Black Ajax" by George MacDonald Fraser? About a British champion at the turn of the last century?

Thanks George, just ordered it.

George MacDonald Fraser, as you probably know, Dave, is author of the great "Flashman" series of novels, some of the funniest books I've ever read. He also wrote one of the best war memoirs "Quartered Safe Out Here," an account of his military service as a 19 year old in Burma.

I must also order 'Quartered Safe Out Here" George.
After I'd finished all the Patrick O'Brien series, a friend recommended the Flashman series to me.
He said he loved them, but I didn't find them quite so satisfying, although the autobiographical one does sound good.