A Man Out of Time. 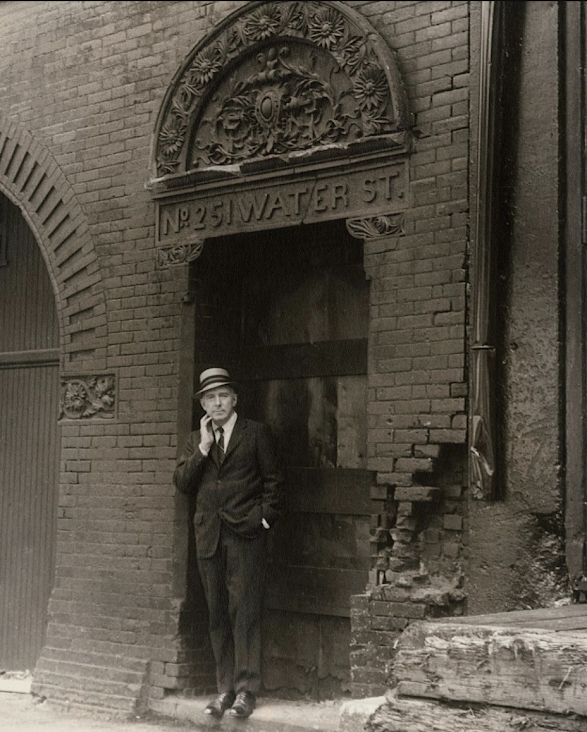 Back almost thirty years ago a writer I had scarcely heard of, Joseph Mitchell, died. He had been with The New Yorker since the late 1930s. Accordingly, in tribute to him, the magazine ran a spread or two of notable writers saying how much they admired Mitchell.

I went out and bought every one of Mitchell's books I could find. And I read them. A couple of times through. (There were still bookstores in New York back then. Including Books & Company, which sold signed copies of Mitchell's books.)

A story emerged about Mitchell. He had spent from 1964 to 1995 at the New Yorker without publishing a word. He came into the office every day, and he typed. But no one saw any writing and nothing was submitted to the magazine. Other writers took to going through his garbage pail at night to see what Mitchell was up to.

They came up empty.

In certain rarefied writerly precincts, Mitchell's flame has never died out. The New Yorker Festival regularly pays homage to him. They organize a trip to a graveyard he wrote about on Staten Island. Or they gather to talk about his great writing on the long-gone greasy-spoon "Sloppy Louie's."

About once every two years or so, someone finds a stray piece of never-before-published Mitchell. And the New Yorker duly publishes it. I would imagine their readership that week leaps. As if Playboy uncovered some forgotten cheesecake featuring Marilyn Monroe or Dorothy Stratton.

In The New Yorker's February 16, 2015 issue, they published an essay by Mitchell, a "personal history." It was called "A Place of Pasts." I've read it probably once each month since it was published seven-and-a-half years ago.

It's the opening sentence that gets me. It hits me like Alexander being shish-kebobbed by a Persian javelin.

By my math, Mitchell was around eighty when he wrote those words. I'm 15 and a half years from that mark. But I think I'm beginning to understand what Mitchell was getting to in his essay.

(By the way, I'll paste the article--because I'm nice--at the end of this post. However, if you can afford it, subscribe to The New Yorker. Or something else you like. Supporting thinking is our civic responsibility.)

Lately, I've been saying a sentence to myself that in a backhanded way sounds like it might have been written by Mitchell himself. I've been calling myself, "A man out of time."

I mean that sentence, unfortunately, in two ways.

One, though I am very healthy and fit, I have a bit of a premonition that things are coming to an end for me. Maybe because my father died at 73 and his father at 56, I don't foresee an Ichabod Crane future for myself.

I don't have the tell-tale creases in my earlobes that portend a coronary, or the perhaps apocryphal line on the back of my neck that medievally is supposed to signify doom, but I just feel "done." I've done enough. My kids are fine. I've got money in the bank. And I have no material wants. And no one really needs me. It's being un-needed that's the worst.

If the great scorekeeper decided to pen my name, I wouldn't put up a fight. I'm not much looking forward to the emergence of American Nazism and it seems to be coming, and inexorably. Nazism of any stripe is rarely good for Jews. Given my mercurial nature, I would not last long under president Marjorie Taylor Greene. I don't think we'd hit it off.

The second meaning to my ears of "A man out of time," is the more conventional one.

That I have a set of standards and behaviors that no longer belong in today's world. Worse, the way things are done today offend me. That's too mild. They make me mad.

Here's where, not above, I won't go gentle into that good night.

I won't shrug my shoulders and show up late.

I won't half-ass work and say to myself, "it's good enough."

Also, I'll research things on my own. I won't trust a brief. I don't trust anyone else to do what I consider my province.

All those behaviors mark me as an anomaly. They're the behavioral equivalent of wearing knickers and a pince-nez or jodhpurs and a riding crop. I'm anachronistic in a world that seems content to phone it in. On a network that seems to drop three calls in five.

I read somewhere not long ago something I liked.

In other words, show respect for your viewer.

A Place of Pasts

Finding worlds in the city.


Joseph Mitchell was born in 1908 into a prosperous family of North Carolina cotton and tobacco growers. At the age of twenty-one, he came to New York City to pursue a career as a writer, and he started contributing to this magazine four years later. In the late sixties and the early seventies, he began writing a memoir. What follows was intended to be the third chapter but was never finished.

And now, right away, before I go any further, I must interrupt myself and say that I am not entirely satisfied with the phrase “living in the past” as a description of my way of life—it makes me sound like some kind of sad old recluse—but living in the past is the closest I can come to it; I hope that my meaning will become clearer as I go along.

I know the exact day that I began living in the past. I didn’t know it then, of course, but I know it now. The day was October 4, 1968, a Friday. I had recently been in what I guess could be called a period of depression, during which, on the advice of a doctor, I had begun keeping a detailed diary, really a journal, and I have continued to keep it, so that I have a record of everything of any consequence that happened to me on that day and on almost every day of my life since then. On that day, according to my diary, a dream woke me up around 4 A.M. In this dream, I was standing on the muddy bank of a stream that I recognized, because of a peculiar old slammed-together split-rail bridge crossing it, as being the central stream running through Old Field Swamp, a cypress swamp near my home in North Carolina. I had often fished in this stream as a boy. In the dream, I was fishing for redfin pike with a snare hook hung from a line on the end of a reed pole. I was watching a sandbar in some shallow water out in the middle of the stream that the sun was shining on, and I was waiting for a pike to show up over the sandbar where it would be clearly visible and where I could maneuver my line until I had the hook under it and could snatch it out of the water. I was intent on what I was doing and oblivious to everything else. And then I happened to look up, and I saw that the bridge was on fire. And then I saw that the mud on the opposite bank was beginning to quiver and bubble and spit like lava and that smoke and flames were beginning to rise from it. And then, a few moments later, while I was standing there, staring, fish and alligators and snakes and muskrats and mud turtles and bullfrogs began floating down the stream, all belly up, and I realized that the central stream of Old Field Swamp had turned into one of the rivers of Hell. I dropped my pole and spun around and started running as hard as I could up a muddy path that led out of the swamp, but the mud on it was also beginning to quiver and bubble and spit, so I plunged into a briar patch beside the path and tried to fight my way through it, whereupon I woke up. I woke up with my heart in my mouth.