What is Advertising? What is its Purpose?

That's ok with me.

I do not fear mortality. In fact, with the way America has descended into an intolerant, gun-toting, theocratic hell, I might even welcome it. The world has changed more substantively--and for the worse--in the last palin-trump-mcconnell-thomas- infused decade--than I can tolerate. If this collapse of  enlightenment thinking is merely an overture to the opera that's coming, then in the mangled words of Samuel Goldwyn, "include me out."

But, George, yours is a blog about advertising.

The great writer Ben Kay in his surpassing blog wrote a post last week, an assessment of the Gran Prix winners at Cannes.

According to Ben's observations, there were 30 Grands Prix winners--let's call them Grand Pricks--and only four won got a $12 trophy for their thousands of dollars in entry fees doing work for something produced by a corporation.

I've had nearly a 40-year career in advertising. That career has helped me put two children through college and advanced degrees with no debt. It's helped me afford two homes--the mortages on which are essentially paid off. I have a decent car (though it was built in 1966) my health, money in the bank and all the appurtenances of a life well-lived.

In those 40 years, I've written ads for:

The average supermarket in America--one-minute of research tells me--has between 15,000 and 60,000 SKUs on its shelves.

I would imagine the average fascist-enabling Home Depot or Walmart have many more.

But in the current sump of our industry, the idea of selling what people buy, or what people produce, is as unlikely as Fred Flintstone wearing a hard-hat when he's down at the quarry. We no longer want to be associated with the dirty, menial things that used to make our world go-round.

It's the advertising equivalent of what we used to call a "garbage man" rebranding himself a "sanitation engineer."

Here's what I do:

I take stuff clients want to sell, whether it's the idea of what they do or what they actually make, or the good it does for people, and I make it simple, understandable and lust-worthy.

Advertising's job is to help them sell.

That's how I see it.

That does not mean I don't have a conscience. Or that I want to sell bad things. It means that I am honest with myself.

There's never been a Nobel Peace Prize for a three-minute case-study fill on recyclable diapers and deforestation in sub-Saharan Lithuania.

But a lot of people--of all colors, genders, orientations, national origins, religions, dominant-handedness--have lived better lives because they made something the world wanted to buy and earned a decent-living thereby.

Like Rick Blaine, I'm no good at being noble. But there's something to be said for the hard-work of real work. And our real work is the real work of selling real things for real clients to real people for real money and, hopefully, to do real good. 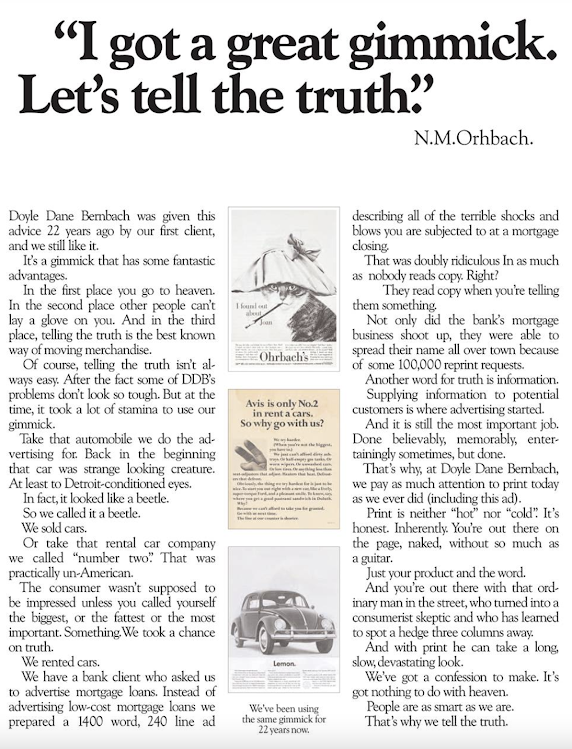