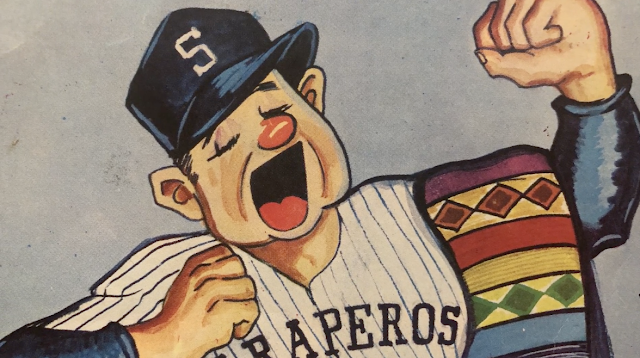 In the heat of the Mexican sun at the height or the depths of summer, it is said by the old people, many of whom know even more than the young people, that the heat will burn the eyelids off the eyes of the iguana and that even rocks seek the shade they can get from other rocks.

Hundreds of years ago, or thousands, when explorers or shepherds or farmers high in the mountains and many days' walk from the sea would find thousands of feet above the alluvial valleys the bones of long-ago sea creatures, those who know know that all creatures from rocks to the lowest baseball player in the Mexican Baseball League look to find an escape from being burnt alive from a sun as unrelenting as the tides.

The sun was an enemy and so was the league itself. The league that built the schedule of the long baseball season. The league that would have you play fourteen games in three cities over the course of twelve days. All under that sun that cracked your skin like an egg falling high from a nest onto the hard earth.

Over fourteen games in three cities in twelve days my spine bent, my arms lengthened, I stooped like a Neanderthal with a Warner Brothers' cartoon tongue, scraping the ground as I walked to and from third base to the dugout and back again.

My swing was as jerky as a cheap wind-up toy. The limited stiff-legged range I already had at the hot corner was chopped by a third or a half or three-quarters or more. My arm was a marionette with a broken string. But still.

Still fourteen games in three cities in twelve days with the sun as cruel as a billy club.

I caught a pop-up to end the next to last inning of the last game. I walked in from behind third base to our dugout, slowing down to roll the ball toward the mound for their pitcher to throw. We were in the hole--down by two runs, and had three outs only to make up the deficit.

I don't remember who we were playing. It didn't much matter then, and it matters a million times less today, half a century later. I sloughed my glove off like I was swatting a giant fly and it landed on the narrow shelf behind the wooden bench in the dugout, in the open seat to the right of my manager Hector Quetzacoatl Padilla, whom I had renamed Hector Quesadilla.

"Jorge," he whispered. "I have seen something from their arm. He drops his shoulder when he throws a bender. He telegraphs it."

I was done with the game at that point, almost too tired to even watch. But Hector repeated himself as their pitcher loosened.

Adame looked at me like I was stupid. Hector repeated the advice.

"Brutus," I yelled down the bench. "Look. He drops his arm when he throws the curve."

As quick as one-two, Adame and Brutus went up to bat and swung like they were swatting flies and came back to the bench. We had two down, quicker than death.

"They do not listen," I said to Hector.

"They do not hear. They have come all this way to lose."

"We can sleep better if we quickly win, too."

Garibay popped up too after just two pitches, and the game was done. The fourteen games in three cities in twelve days were over.

We grabbed our things and shuffled to the locker room. Our spikes scraped against the concrete of the floor of the old stadium. I half expected to see small sparks fly like when a broken muffler is dragged along the asphalt.

Hector and I, sitting at the far end of the dugout, were the last to make it into the locker room. Hector stopped me before we entered the ramp to the hallway.

"Adame, Brutus, Garibay. They did not listen."

"They did not pay attention to what you noticed. They might have hit the ball if they had. At least Garibay."

"You are right," Hector said.

We continued to the locker room. Though the team was tired and we just lost another game, the mood was not bad. There was laughter from the showers and some singing.

Freddy Fender was playing on the radio, singing "Desde Que Conozco." Some of the boys were standing in small groups in their sliding pads and drinking cold beers, tapping the tall brown bottles to the backbeat.

"It is one thing to pay attention," Hector said. "But the real trick is something else."

"Jorge!" Isael Buentello yelled to me. The bottle he threw my way spun end-over-end and I caught it by its neck.

"Gracas," I said, slurring the word, eliding syllables, not like they taught us in high school Spanish.

I cracked the cap off and the suds spilled out like champagne, sticky with thick foam. I offered Hector the first swig.

We had two nights off after that.

I paid attention to all of it.