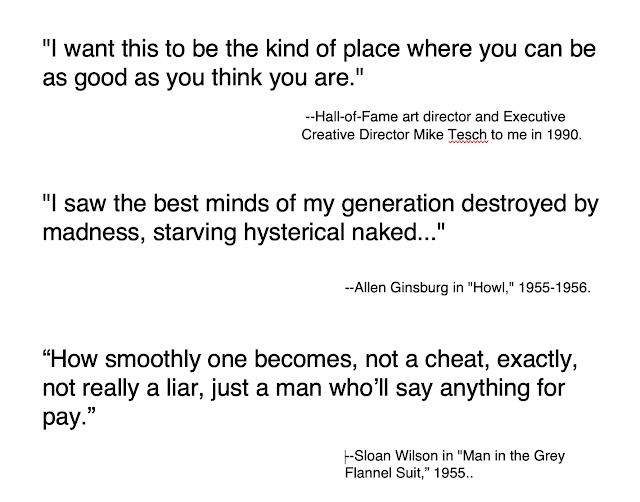 I had dinner on Friday night with some friends. Unusual for me for a couple of reasons.
One, I'm most often in solitary confinement up on the Gingham Coast of Connecticut. And two, I don't have that many friends. Certainly not that many friends I'm willing to have dinner with.
We all had done well in the agency business. All had done well but we all, for one reason or another had been thrown out. Either we got fired like I did. Or we got fed up and left. Or we looked at a bloodied limb or a scarred soul and said 'sotto voce,' "this is sufficient."
In any event, we were on the other side now. Not the outside looking in. That's too kind to where we were. The outside--and smarter than Lot's wife, smarter than Orpheus, not looking back after Eurydice, not looking back at where we were.
Not looking back at the mean concrete rigidity of hierarchy and ego and ass-kissery and protocol and who's threatened by you and who, because the agency business today is a Zero Sum game and if you get someone else doesn't, so they must therefore keep you dumb, mute, bedraggled and in irons.
There's something wrong with the way our business works. The way our country works. The way work works.
The nit-picking.
The 21 mandatories.
The demands.
The 'you-musts.'
The 'this-is-the-way-we've-always-done-its.'
So much is so Soviet. So repressed. So limiting. So taking the approximately 1400 grams of your brain and allowing you to use about 300 grams for thinking, 300 for obeying squashing rules and the remaining 800 for paranoia.
An agency network I used to love--a network that sold itself to the maximize-profits minimize-cost devil has, at least in the New York office has, gone from about 2500 people when I re-joined them in 2014 to fewer than 300 today.
Yet when they bang their false-bottomed drum and proclaim themselves winners in every award show trumped-up and under the warm French sun, another shard of honesty, another ember of truth, another sliver of humanity dies.
Almost two thousand years ago, in the Sasanian empire, millions of people followed the Parthian god, Manichea, or Mani.
His was a religion where there was an eternal battle between the ethereal, goodness and light and the material, evil and darkness. Manichaeism was once the dominant religion of the west. And maybe it is once again during our un-nuanced and riven era.
There is much darkness in our industry.
But it doesn't have to be.
Go.
Do.
Be.
Be good. Be yourself. Be a fly in the ugly oppressive ointment of corporate Serfdom 2.0.
Just know that there are people out there who for decades had been gutted like a mackerel by a lonely Mexican fisherman on an algaed jetty. Their innards thrown to the squawking gulls and picked over like your soul.
Like Prometheus and his regenerating liver, they have found an outside. Found a way to return to the non-zombied living.
Not easy.
But doable.
Workers of the world, Un-tie.
You have nothing to lose but your Squash.

Posted by george tannenbaum at 6:43 AM