The Permanent Early Train. A Guest Post by Wil Boudreau.

Wil Boudreau and I don't know each other, really. But as ad people of a certain age, we connected some time ago to get to know each other and to talk about starting our own agencies somewhat later than people typically do.

Wil sent me a note and asked if he could post something on Ad Aged.

Wil grew up at BBDO NY rising from Copywriter to ECD.  He lead creative on famous brands like Snickers, Guinness, Lowe’s, E*Trade, Pizza Hut and more.  He was then given an extraordinary rendition to become CCO of BBDO ATL where among other things he put the late president JFK into a Super Bowl ad for Carnival Cruise Corporation.  He escaped Atlanta to be CCO of the oddly named The & Partnership NY, where he helped make the Wall Street Journal less “Male, Pale and Yale.”

Lately he’s having way more fun than all of those gigs combined by being Founder/CCO of Boudreau Advertising, which he runs from his kitchen table.

Oh, Wil also has a podcast. Which you can listen to, here. 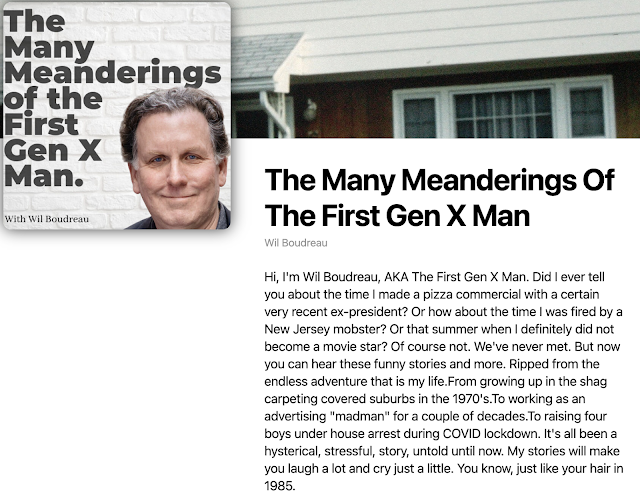 I have several running jokes with my kids. One I always use at the end of an epic movie when the leading man and leading lady, while first appearing to be total opposites who hate each

other, decide that somewhere along the way to finding the magic space stones or stealing the Magna Carta or battling an army of lovable pirate zombies, they realized their true feelings and embrace in a long Hollywood kiss. Whenever this kind of a kiss occurs, usually while the couple is covered in alien goo, or volcanic ash or velociraptor blood, I always say… “And that’s exactly how your mother and I met.”

It works every time. At least as far as I’m concerned.

Another running gag I’ve been using over the last two years happens at dinner time. We’ll all be seated at the table together and I’ll say, “Looks like Daddy got the early train again” Thus

explaining my previously rare appearance at the dinner table on a weeknight. This has long since stopped getting a laugh. But I say it anyway. I realized recently that I’m actually saying it

to myself. It’s an affirmation of a new reality I still haven’t fully gotten used to. I can’t help but feel like this is still temporary. That one of these days I’ll find myself on a train long after my

family has finished dinner. Wolfing down my dinner of a hastily grabbed slice of pizza from Grand Central Station’s food court. And likely drinking a couple of room-temperature IPA’s to

both wash it down and calm me down from another day in the lion’s den.

The COVID lockdown coincided almost exactly with the start of my own virtual ad agency. I’m still an advertising creative director. I’m still really busy. I still have meetings. I still make all

kinds of ads. I just do it all now from my kitchen table. As much as I hate the internet for the soul-sucking it’s perpetrating on my kids thanks to the scourge of Discord and Minecraft and

grateful to technology for this gift of working from home. This gift of catching a permanent early train. Also, a permanent late train in the morning, since I’m always around while my kids

are heading off to school. I think about it every single day. And I marvel at how implausible it is that exactly during the most challenging, painful, and devastating couple of years in recent

history, my life in many many ways got immeasurably better.

Ironically life is better because these days, I’m in way more meetings. Except some of those meetings are bike rides, and games of ping pong, and long talks about everything from the

awesomeness of “The Batman” film to the war in Ukraine.

It's no wonder that midtown Manhattan office vacancy is higher than just after 9/11, when no one wanted to be in an office building. And that the Metro North trains I used to take are running with less than half of their pre pandemic commuters. Meanwhile leisure travel is back up. Airports are crowded. Cruise ships are running. Concert crowds and Broadway are back. People are live and in person everywhere, except the office. And indications are, they ain’t coming back any time soon.

Because technology did what it does when it’s on its’ best behavior. It changed our lives for the better. We can do now do everything we used to do in an office virtually, no matter where we are. The appeal of dinner with the ones we love is proving far more appealing than any office happy hour.

I remember seeing an early twentieth-century illustration of what the Manhattan skyline would look like in the future. Nearly every skyscraper had its’ own rooftop zeppelin port. Then the

Hindenburg blew up and they invented airplanes, and suddenly that vision of New York City was obsolete. I wonder how long it will take Manhattan, and other cities to realize that people

Ok the mariachi bands on the subway are a bit polarizing, but you get my point. The things that make cities great will never go away. But a good percentage of the commuters are likely gone

for good. They’re already talking about turning midtown into a more residential area. I smile when I think of hipsters living in the high rise my office once occupied on Sixth avenue. I hope if

those office buildings ever do get turned into apartment buildings, they don’t retain any residual stress in the walls from when the place was chock full of business world anxiety. I

imagine a hipster spitting out his kombucha when he’s suddenly hit with some existential dread from the time someone lost a new business pitch while standing in the exact same spot of what was a conference room and is now a kitchen nook.

Even if there aren’t as many day laborers, there will still be plenty of adventures to be had in our great cities. And they’ll always be great places to fall in love. Just like I did. When the

they had come to see each other as much more than broker and customer and had that great big kiss right there in front of a shoe repair place in Brooklyn.

That kiss would lead to four kids, a dog, two cats, and a house in the suburbs. And later, much later, the unexpected gift of

permanent early trains every single night for the rest of their lives. Talk about a Hollywood ending.

Posted by george tannenbaum at 8:17 AM