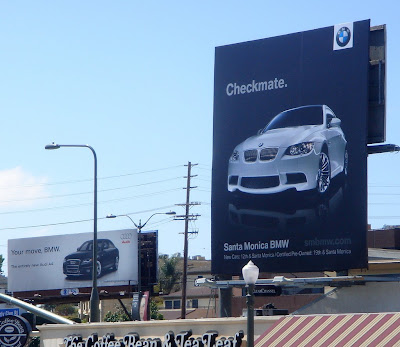 Posted by george tannenbaum at 9:23 PM

I'm shocked that GSDM (BMW's agency)had that in them or that Venables Bell (Audi's) would leave themselves open like that.

yes, audi left it wide open, and with a smaller hoarding they look like real suckers...i'm also surprised that they (bmw/gsdm) engaged in a conversation with such wit...normally getting anything approved and produced is a struggle and the opportunity evaporates...but bmw does have a history through the years of doing interesting stuff now and then.

Watching Discovery Channel program about wolves and what happens during a fight, the loser rolls over and exposes it's underbelly and genitals. Can't wait for the next billboard.