Every once in a while. 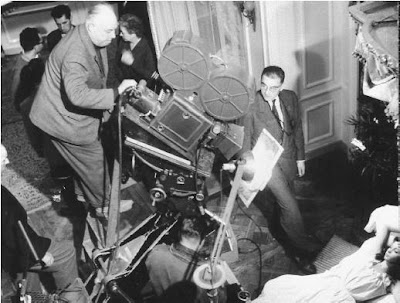 Now and again I get in a writing slump. Or more accurately, I can think of nothing to write about. Nothing angers or upsets me. Nothing tickles me. Nothing strikes me as interesting.

When that happens, as it does a couple times a year, I turn to my friends--Jean Renoir, Rene Clair, Billy Wilder or Preston Sturges, four of the greatest directors of all time (sorry Pytka) and see what they have to say.

Today I happened upon this quotation from Renoir: "A director makes only one movie in his life. Then he breaks it into pieces and makes it again."

There are many things that strike me about this. First, and most important, is that the fact of the matter is, there are not that many ideas in the world. I've heard it said that there are but seven jokes and seven plots in the world--everything is a variation on just a few themes.

Second, is the clarity, simplicity, authenticity and lack of pretense in Renoir's statement.

Finally, Renoir expresses no infatuation with doing something "new," "breakthrough" or the need to do such because "everything's changed."

The fact of the matter is everything hasn't changed. People are still people. And Renoir's 1939 "Rules of the Game" will tell you more about Goldman Sachs than anything you'll read in the paper or, most certainly, hear on the glib lip-flapping illusion we call the news.

They'll give you something to write about.
Posted by george tannenbaum at 7:10 AM

Years ago someone gave me this advice on producing award-winning advertising. There were two ways to do it:

2. do the ordinary extraordinarily well.

99.9% of work falls into the second category.

It's quite possible that two or three advertising people thought of an original idea. The rest of us just have the arrogance to think we did. How much better would work be if we stopped trying to be original, and just concentrated on being good.

Yesterday a baseball pitcher did something that had only been done 18 times before in the history of the professional game--he produced perfection. Good thing I wasn't watching "Rules of the Game" or I would have missed it.

OK, anonymous. I get the point.

What? No Capra, no Cukor to get you out of your slumps?

Well, I suppose they might take you in the wrong direction for AdAged, ha ha, but they're my two tops.

I love your four buddies but just a touch less. (Renoir: the line "Lotte hat blaue Augen" from Grand Illusion haunts me. Best delivery of a single line ever on film. That has to be Renoir's doing.)

When I get into a slump (can we not talk about my current slump... had to do this for today's post) I grab a book on the subject at hand, open it to a random page, and see if I can argue with the author.

When I can't do that, they'll know I'm dead.

Kelly, nothing wrong with Cukor or Capra. I love them both. And Preston Sturges. And William Wellman and Leo McCarey, too. Of course, Lubitsch.

They, and about one million others give me a smack in the head when I need it. And usually hand me a laugh when I'm bored.

I feel lucky that I have them.

Exactly! Such a treasure trove.

You know, when I was 25 people would look at me funny when I mentioned some of the movies (directors, etc.) that I love.

I guess the upside to crossing 40 has been that people expect me to say I like stuff that doesn't involve gratuitous gore or sex, and they mostly accept that I don't mind using my brain while watching a movie.

They still look at me funny, but now they expect it. :)