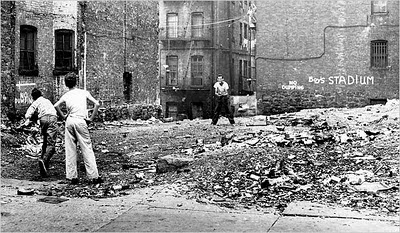 Down the street from my parents’ house was a vacant lot surrounded by six to ten story buildings on two sides. Those buildings had no windows looking out over the lot because where the lot was now, a building used to be. The lot was square and the city did some work on it, putting down some grass, a backstop and a couple of benches for players and a small section of bleachers for people to watch. A couple of evenings a week in the summertime when it stayed late out till almost nine, a couple dozen neighborhood men would show up there and play baseball.

The games weren’t formal affairs. There was no umpire and no uniforms, just a bunch of older guys in shorts, sneakers and t-shirts drinking beer and playing ball. All the kids in the neighborhood and some of the moms would head over there in the evening to watch the men play. Even though we lived less than five miles from Yankee Stadium, and the Yankees were on TV virtually every night, these games somehow seemed more important than those played by Big Leaguers, at least until it got dark out and the kids would run home to watch the Yankees.

The dimensions of the lot were such that the building that loomed over right field was close to what was designated home plate, maybe 150 feet away. This gave the field a drama that was missing from more traditional fields, like normal school yards. It was like the “short porch” in right in Yankee Stadium that was just 296 feet from home; it was something to aim for and since a ball hit off the wall was ruled as in play, it led to a lot of excitement and even more arguments.

My father never played in these games. They were more the province of the heavily muscled Italian men who lived in the neighborhood and who didn’t work in the city. The neighborhood I grew up in was divided roughly in two. On one side lived the Italians, the people who worked locally and made the town run. They were the carpenters, the shop-owners, the plumbers, the auto repairmen. The mothers often worked too, as nurses or they helped out in the family shop. Some were substitute teachers or worked in the school as cafeteria ladies.

They lived in run-down little houses with fake brick fronts attached with two penny nails and neatly manicured lawns. Or slightly larger houses covered in stucco, with detached garages further back. Or in two-family homes that were symmetrical like a Rorschach blot.

These Italians were tough men who had heavy beards by the time the game started even though they had shaved that morning. They were men who had lived in our neighborhood for generations in houses that were even smaller and more beat up that ours and big families accompanied them to the sandlot. They were the regulars.

On the other side of town lived the Jews. Men like my father who didn’t look at home in a tee-shirt. Not a bit like the Italians with major-league-looking sweat stains under their arms and big, burly forearms like Popeye. My father was a big guy, more or less gone to seed, but over six-feet tall with broad-shoulders and long arms. One night, I suppose one team was short a player, my father was coaxed into playing. It had probably been 20 years since he played a serious game of ball and you could tell he was nervous in front of his children, nervous that he would look uncoordinated or un-athletic or not adequate in the way that the other men were adequate.

A couple innings passed uneventfully. Not a single ball was hit to my father who was manning second base. But in this inning it was my father’s turn to come to the plate. I had never seen my father hit a ball before except for fungo with me and my brother so we could practice our fielding. I wasn’t sure he could do it. The guy on the mound for the other team threw entirely too hard and seemed entirely too cocky.

Nevertheless my father stepped into the box and went through a slightly comical major-league pantomime, rubbing his hands with dirt, tapping the dust off the soles of his sneakers, taking a couple of slow, looping practice cuts and checking down the line with the third base coach for any signs and instructions.

The pitcher wound up and zinged one in and my father let it whiz by for a strike. Because my father wasn’t one of the regulars, the few people rooting for him called him not by name but by “hey, batter.” “Hey batter,” I repeated, cheering my father on.

There were standard baseball insults in those days that didn’t involve either profanity or originality. To a pitcher there was “we want a pitcher, not a belly itcher” and the infinitely wittier “we want a pitcher, not a glass of water.” For guys at the plate there were barbs like “ya swing like a rusty gate” or the slightly clerver “Aunt Jemima makes a better batter.” I dreaded hearing either of those about my father. I knew, somehow, he was no match for the Italian men, nevertheless I was hoping some muscle memory would allow him to make contact with the ball. My big fear was that he’d swing like a rusty gate. That Aunt Jemima was a better batter.

The second pitch came in high and my father swung hard if a bit late but somehow lined a rocket hard off the close-by rightfield bricks. He hit the ball hard. It resounded off the wall with a crack. This ball clearly would have gone far, but for the wall. On a regular field—or in Yankee Stadium with its short rightfield porch, it might have cleared the fence for a homer.

My father ran toward first, slowly. He was creaky and could hardly move. His body unfolded like an over-starched shirt as he transitioned from hitting to running. He probably hadn’t run for at least as long as he hadn’t hit a ball, twenty years or more. As he slogged toward first, the ball ricocheted fast off the wall and was fielded cleanly by the first baseman on one bounce not far from the first base bag. The first baseman ran quickly over to first and beat my still unfolding father there. My father was out by two steps and a half. It seemed unfair, somehow, to hit one so hard and to put out so easily, but as my father said as he trotted in after making an out, “It’s a game of inches.”

I don’t remember who won or lost the ballgame. Or what my father, or anyone else did after that. I suppose it got too dark to continue playing and we all went home to our little houses or too-small apartments and watched the pros on TV. I don’t remember if my father got up to bat again, or if he had to perform in the field, catching a towering popup or deftly turning a double play.

I just remember that he hit the ball. Hard. And that was good enough.
Posted by george tannenbaum at 7:39 PM

What a wonderful story. You're such a great story teller. Although I didn't grow up in New York, or even in a place where baseball was played, I can feel and smell the atmosphere like i had indeed been there at that time.