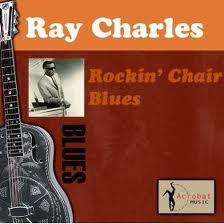 In 1967 I was nine years old and I had an experience that changed a lot for me.

My parents took me to the Norman Jewison movie "In the Heat of the Night." I heard Ray Charles for the first time--his voice a clarion--for ever after rock and roll, including the Beatles and the Stones felt thin and white. Frankly, even now, 44-years later I get chills when I hear Ray Charles.

Even though I was just nine, I became obsessed with Ray Charles. I traveled all over Westchester on my bicycle searching out his records. In those segregated days, in a country just north of New York City where white and black didn't mix (except for cleaning women) it was tough finding Charles in white record stores. But I did.

One of the first albums I found was "Rockin' Chair Blues," a collection of early Charles, when he was in Seattle playing with a small combo. I learned later on--this music was recorded in the late 40s and 50s, that Charles was heavily influenced by the great Nat "King" Cole and essentially imitated both his vocal and piano styles. It was very different from the Ray Charles of "In the Heat of the Night."

This morning on my iPod, I listened to about half of an album called "Ray Charles The Complete Swing Time and Down Beat Recordings 1949-1952" which included most of the tunes from "Rockin' Chair Blues." I highly recommend it.

If you listen, you can hear Charles literally finding his voice. Many of the songs are in the Nat Cole vein, every once in a while, however, Charles emerges. With something clear, unique and "him."

As creative people, like Charles, we go through the same process. We grow up, in advertising or whatever pursuit we follow, influenced by many sounds, styles, voices, vocabularies. Often we start by imitating. I used to try to write like Ed McCabe and Curvin O'Reilly.

Then as time goes on, if you're working hard and working hard at gaining confidence, your fingers feel different on the keyboard. Writing (in my case) becomes less about thinking and more just "doing." The voice, yours, is in you. Hard to articulate to others because it is in your pith.

As Yogi Berra is reputed to have once said, "You can hear a lot by listening."


Posted by george tannenbaum at 8:29 AM

I love that voice

One of the most insightful things into the creative process I've ever heard was John Lennon's sessions picking out Strawberry Fields Forever. Similar I think in that he was trying to find the "voice" of the song.

Makes me chuckle now too remembering back to all those hours I spent poring over lyrics in an attempt to figure out "what he was trying to say"... The answer, of course, is nothing -- the words sounded right at the moment, and he kept them.