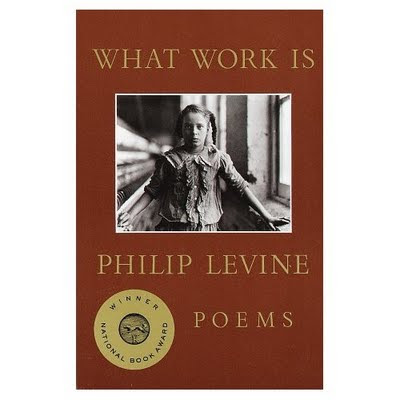 I just heard a report on NPR about America's latest Poet Laureate, Philip Levine. The title of this poem appealed to me.

If you said "Nice day," he would look up
at the three clouds riding overhead,
nod at each, and go back to doing what-
ever he was doing or not doing.
If you asked for a smoke or a light,
he'd hand you whatever he found
in his pockets: a jackknife, a hankie --
usually unsoiled -- a dollar bill,
a subway token. Once he gave me
half the sandwich he was eating
at the little outdoor restaurant
on La Guardia Place. I remember
a single sparrow was perched on the back
of his chair, and when he held out
a piece of bread on his open palm,
the bird snatched it up and went back to
its place without even a thank you,
one hard eye staring at my bad eye
as though I were next. That was in May
of '97, spring had come late,
but the sun warmed both of us for hours
while silence prevailed, if you can call
the blaring of taxi horns and the trucks
fighting for parking and the kids on skates
streaming past silence. My friend Frankie
was such a comfort to me that year,
the year of the crisis. He would turn
up his great dark head just going gray
until his eyes met mine, and that was all
I needed to go on talking nonsense
as he sat patiently waiting me out,
the bird staring over his shoulder.
"Silence is silver," my Zaydee had said,
getting it wrong and right, just as he said
"Water is thicker than blood," thinking
this made him a real American.
Frankie was already American,
being half German, half Indian.
Fact is, silence is the perfect water:
unlike rain it falls from no clouds
to wash our minds, to ease our tired eyes,
to give heart to the thin blades of grass
fighting through the concrete for even air
dirtied by our endless stream of words.
Posted by george tannenbaum at 5:38 PM