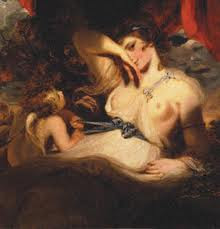 I am reading Robert K. Massie's magisterial new biography of Catherine the Great. (I know it will disappoint George Parker, but 3/4ths of the way through, the Empress has so far avoided doing anything with horses outside of riding them.)

Be that as it may, next time you think your agency is a nest of vipers, pick up a tome like this. The politics, the intrigues, the back-stabbing and gossip are, literally, murderous. 18th Century Russia makes agency life seem like skipping through the tulips.

After Catherine led a coup d'etat to knock Peter III, her putative husband and full-time weirdo, off the Throne, she spent a good amount of time and showered rubles, titles and other largesse on her lover of the time Captain Gregory Orlov. Orlov was a rough, crude man who had designs on marrying the Empress. That and an attempt by Lt. Fedor Khirtovo to release Ivan VI from imprisonment in the Schlusselburg Fortress, and thus challenge Catherine's right to the Throne, led to a lot of gossip and speculation that Catherine's hold on Mother Russia was, at best, tenuous.

So Catherine did something we could all learn from.

"To end this chatter, she issued on June 4, 1763, a so-called Manifesto of Silence. To beating drums, people across the empire were summoned into public squares to listen to heralds reading her proclamation, which declared that "everyone should go about his own business and refrain from all useless and unseemly gossip and criticism of the government."

Ah, a Manifesto of Silence. Golden.
Posted by george tannenbaum at 8:41 AM