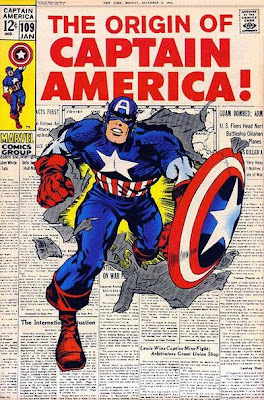 Joe Simon, who created the comic book hero Captain America died on Wednesday in New York. You can read his obituary here: http://www.nytimes.com/2011/12/16/books/joe-simon-a-creator-of-captain-america-is-dead-at-98.html?hpw

I loved comic books when I was a kid and still, on rare occasions read them today. I used to love Captain America when I was about 12. This was during the peak of American involvement in Vietnam, when our country seemed to be crumbling, and there was something reassuring about the comic. What's more, comics in those pre-inflationary days cost 12-cents. I had a paper route, and could buy eight a week for less than a dollar. My brother did the same. We were careful to avoid getting doubles. These comics were much of our education growing up, though my brother is a lawyer and wouldn't admit that now.

In any event, this is the part I really like from Simon's obit:

Simon "moved to New York, where his first job was for Paramount Pictures, retouching still photographs of movie stars. 'I retouched some of the most famous bosoms in motion pictures — Gloria Swanson, Joan Crawford, Bette Davis, Carole Lombard and Dorothy Lamour,' he wrote. 'Good bosom men were considered experts and got lots of work. I could hold up a sagging bust line with the best of them.'”
Posted by george tannenbaum at 4:21 PM