Another night at the Tempus Fugit.

Last night I arrived at the Tempus Fugit at around 1:45. Whiskey, my 11-month-old golden retriever had metaphorical ants in her metaphorical pants and used her cold, wet nose to nudge me awake.

Whiskey’s not the sort of dog to cry wolf. When she says she needs to go for a walk, I listen. So I quickly threw on a pair of jeans, a grey sweatshirt I’ve had since high school, a pair of running shoes and walked the 20 minutes up town to the Tempus Fugit.

There was a time, not so many years ago I suppose, when I could cover the distance to the Tempus Fugit in half that time. I walk slower now. It’s not the infirmities of age, the creakiness of my knees or even the result of my increasingly dour disposition. It’s more I like to see where I’m going—even at night, even over a well-trod path. I rush all day at work and at life, when I walk, it suits me to take my time.

There’s an ancient Spanish palindrome that makes sense here. “La ruta nos aporto otro paso natural.” My Spanish may be on the rusty side of non-existent, but I translate that as “The path provides the next natural step.” In short, let some things come to you. Receive them. It might just work. 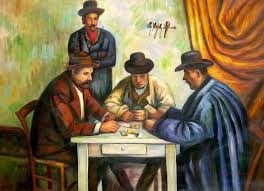 The Tempus Fugit was uncharacteristically crowded when I showed up. And by crowded I mean there were two older men sitting at a small table against the back wall nursing each a Pike’s Ale (The ALE that won for YALE.) There were only the two of them, and they weren’t playing cards but I thought immediately of Paul Cezanne’s painting, “The Card Players.”

I’m lucky enough to have an interpretation of that painting in my home--a signed lithograph by Raphael Soyer in which he adapts Cezanne to his grittier, more melancholy style. 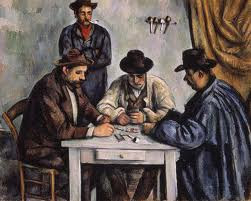 I took my usual seat at the bar and Whiskey her usual spot on the floor. Whatever schpilkas had afflicted her was gone now. Now, she rested.

The bartender slid me my usual, an eight-ounce juice glass of Pike’s and he brought Whiskey her usual wooden bowl of water. In only a moment he brought over a small
bowl of peanuts for me and pushed over a large glass jar filled with pickled hardboiled eggs, something I never have and never will sample.

The bartender began, as he usually does.

I nodded. My Dante is rustier than my Spanish.

“What ring of Hell is that? Bad cable service?”

“No. Hell is too good for cable companies. It’s the Eighth Circle. The ring reserved for Impersonators, Counterfeiters of Persons or Money. Falsifiers of words.”

“I know the sort. My business is positively teeming with them.”

“The one with “Il mio babbino caro.” Callas

The bartender refreshed my Pike’s and continued on his way. This is yet another reason I love the Tempus Fugit. Your glass never runs dry.

“Gianni is a worm. He impersonates a friend, he writes himself into a Will, so he can inherit his friend’s horse. In other words, he cheats and steals. He connives. He canoodles. He’s a sham, a fraud, a fake and a phony.”

"Some people deserve to burn in hell." I emptied my second.

He wiped the already spotless bar.

After a few moments I slid a $20 across the polished teak.

And Whiskey and I walked, slowly, home.


Posted by george tannenbaum at 12:36 PM