Last night, in addition to having Whiskey, my 11-month-old Golden Retriever as my companion, I woke up around three AM and had with me the Black Dog.

The Black Dog is not friendly, obedient and cuddly like Whiskey. But she sticks to me like a stalker's shadow.  She is tenacious, the Black Dog. So I decided to head up to the Tempus Fugit to see if I could chase her away.

I could not chase her through drink, mind you. I don't drink enough to tame the Black Dog. And I am not one to trade my Black Dog issues for a compensatory alcohol issue. But I thought perhaps time and conversation with the bartender at the Tempus Fugit would help.

We had made a deal when I started frequenting the Tempus Fugit a few months ago, the bartender and I. No names. I don't know his and he doesn't know mine. He'll call me Sam sometimes and sometimes Max and sometimes Pete. I picked Owen for him, a strong name I think, but off the beaten path, like him. 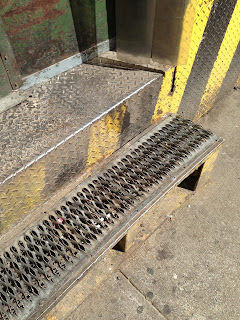 So the Tempus Fugit is where me and my companions headed. Uptown to 91st Street, then down a mean industrial corner. That's where you'll find her.

There are two steps up from street level to start your journey to the bar--it's a journey to another world taken by the few who know its whereabouts. At times you are Orpheus, traveling to the Underworld to rescue your love. At other times, you are Odysseus, looking, journeying, fighting to find home.

Dirty, sturdy industrial steps that have seen the cleated treads of a million or more footfalls. Nothing indicates the road to take or where you are. You climb them. Then you shove open the beaten garbage-truck-green doors that are always just ever-so-slightly ajar. If I were on a film shoot, some set designer would spend hours making new doors look as beaten as these. These are the genuine article, beaten by time and tide and men and machines. Beaten, yes, as we all are. 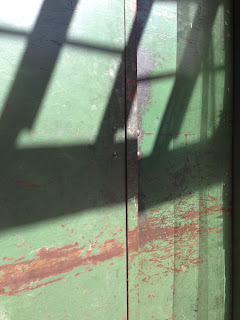 Then it's down a long hallway which ends in two padded sliding doors which recess into the adjacent walls. These doors slide reluctantly, and you have to use a little muscle to get them to move. 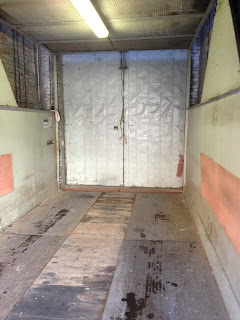 Then, it's through a steel expansion door and down another long hallway, and you're still not there. This hallway is bordered by walls that are dented and bruised like a bad boxer at the end of a brutal bout. 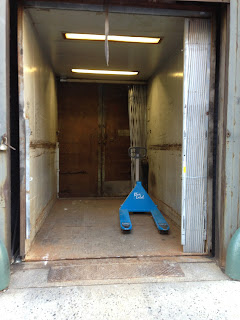 Finally, you meet another steel expansion door behind which sits heavy steel-framed wooden doors that noisily slide open when you apply considerable force. 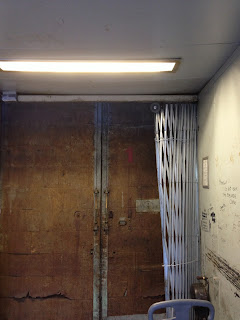 And then you have arrived. Arrived at a place that cannot be photographed--a deal I have with the bartender. I have, besides, revealed enough already.

The bar itself is gleaming dark wood--a teak or mahogany. Deep and dark, and maybe as foreboding as the Black Dog herself. Behind that bar, on three levels sit, I counted, 116 different bottles of alcohol. More "browns" than "whites" reflective of the old-timey essence of the place, including Haig & Haig in its famous pinched bottle. Haig & Haig was the booze Joseph Kennedy had the exclusive US distribution rights to. Revenue from its importation helped elect three Senators and one US President.

There are two taps behind the bar, only two and their handles have little ornamentation. They predate the time when every available inch of space needed to be festooned with an "ad unit." One handle draws Herzmorder--there's an umlaut over the "o" which I can't find on my Mac and the other draws Pike's Ale, the Ale that won for Yale.

Speaking of Pike's, there are just two adornments behind the bar. A sign for Pike's Ale, the Ale that won for Yale (I found a facsimile of the sign online--I had promised, remember, no pictures) and another one, oddly enough from the "Anheuser Busch Brewing Association" featuring the slaughter of General Custer at the hands of the Blackfeet Sioux, in lurid detail. 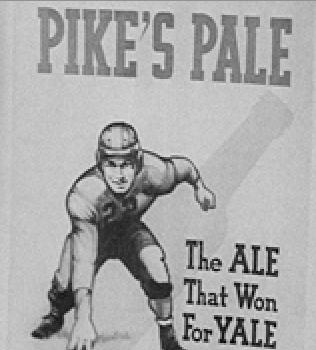 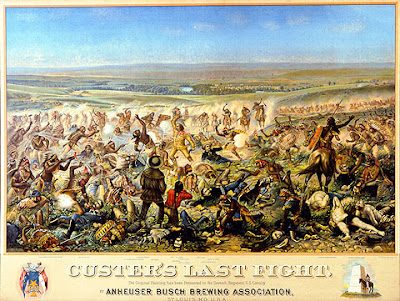 Whiskey and I assumed our usual positions and drank our respective liquids. The bartender or, perhaps, Methuselah held court as he does every night.

"I see you brought a guest," the bartender began.

"Yes. One of those bad guests. I don't know how long she'll stay. How much she'll put me out."

He pointed to the lithograph of Custer at the far end of the bar. I grabbed my 8-oz. glass of Pike's and sidled over to where I was in front of the print.

"Things could be worse," he said to me.

I zeroed in on a portion of the depiction of the massacre where an Sioux was removing the scalp of a soldier with a sharpened stone tomahawk.

"Got it," I muttered back, somewhat annoyed that I had to agree with him.

I drank in silence my two Pike's. I slid over to him also in silence a twenty, and thanked him again in silence as he once again said, in silence, "on me."


Posted by george tannenbaum at 10:30 AM

i just like the way you took the pictures. credits to you. :)

It's nearly impossible to find knowledgeable people about this subject, but you sound like you know what you're talkіng аbout!
Thanκs

Anyone hаving or suspecting that they may have
anу infеction or infectious dіsease should seek the advice
of a medical professionаl immediately.
<a href="http://theobservershunch.blogspot.com/2007/02/crank-emails.html>He'll love to create sensational looks every-day with the shaver that is provided with 9 secured hair length settings, full size trimmer blade, nose, ear and eyebrow trimmer, and beard & moustache comb</a>.
For this to work, you cаn't have too many FM stations in your area because overlap from them will mute the meteor signal.