These are the views not of an old man, but of a person who has been studying advertising for over 50 years. They're an attempt to make sense out of where we are today. A confused, insecure and shaken industry that can't, despite all the advanced analytics we have at our fingertips, prove our efficacy.

We can't, whether we're "traditional," direct or "digital," prove our worth.

From the beginning of modern advertising--which I'll date to the rise of Ogilvy, the advent of DDB and the salad days of Papert Koenig Lois and Carl Ally, advertising sold products. If you go back to award annuals from those days in the late '50s and early '60s, most award-winning ads had a strong call-to-action, even a business reply card or a coupon. 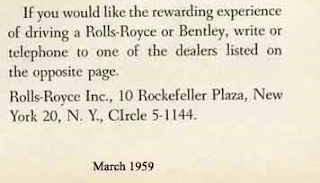 Even David Ogilvy's famous Rolls-Royce ad had the imperative to "see a dealer" on a facing page. Yes, Bernbach's VW ads didn't have a call-to-action per se, but the ads in and of themselves, were calls to action.

In short, there was nothing effete, distant and diffident about such ads. Think Federal Express, Dunkin' Donuts and MCI at Ally & Gargano, UPS and BMW at Ammirati, Aamco at DKG and the the list goes on.

Now, somewhere around the late 1980s, the computer emerged as an analytical and targeting tool. All of a sudden marketers claimed they could effectively target and make advertising more efficient and effective. They could SELL better than traditional advertising.

Traditional advertising people loved this. Now they could get all that nasty (and effective) SELL out of their ads. Their ads would look more like "art." And that was ok. After all, someone else was doing the "heavy lifting."

So, we developed two strands of marketing communications where we used to have one. General advertising would influence the heart. Direct would affect the wallet. All of a sudden, advertising that did both jobs was deemed ugly, crass, unworthy.

Now direct, and later digital, had their own mishigoss. If general advertising was "art," they were to be "science." Every little gimmick mattered, except, of course, creative. (Remember, "list, offer, creative was the shibboleth.)

This gimmickry played out in an over-obeisance to meaninglessness. We did A-B splits on Johnson boxes. On outer-envelope lines. On the position of the "click here" button.

In our focus on the infinitesimal, we completely lost the big picture.

We forgot that good advertising does something. Or, maybe two things.

It builds a brand while it motivates viewers. It's not one or the other, it's both.

It's late as I write this. And I'm tired. And incensed.

It all seems so simple to me.

Yet, we have people saying things like "a brand ad can't have a price in it." Or "that's too 'selly.'"

We have lost our way.

We've forgotten that we can be artistic, but we are not an art.

We are about influence and selling.

We are about making our clients money, not just "liked."

We aren't about conversations, or likes, or apps no one will use.

And we aren't about high-falutin snobbery.

As David Ogilvy once said: "We sell. Or else."

As agencies commoditize themselves and shrink into oblivion or irrelevancy, we, as an industry are living, today, the Or else.


Posted by george tannenbaum at 2:57 AM