Advertising and Diversity. A retrospective and some questions (which won't be answered.)

Over the past couple of days, every white, male, multi-millionaire head of the Holding Companies that exercise oligopoly-control over the advertising industry, thereby colluding to depress wages so they can earn eight-figure compensation packages and can return ‘shareholder value,’ has spoken out against the “systemic racism” of the industry they purport to lead. 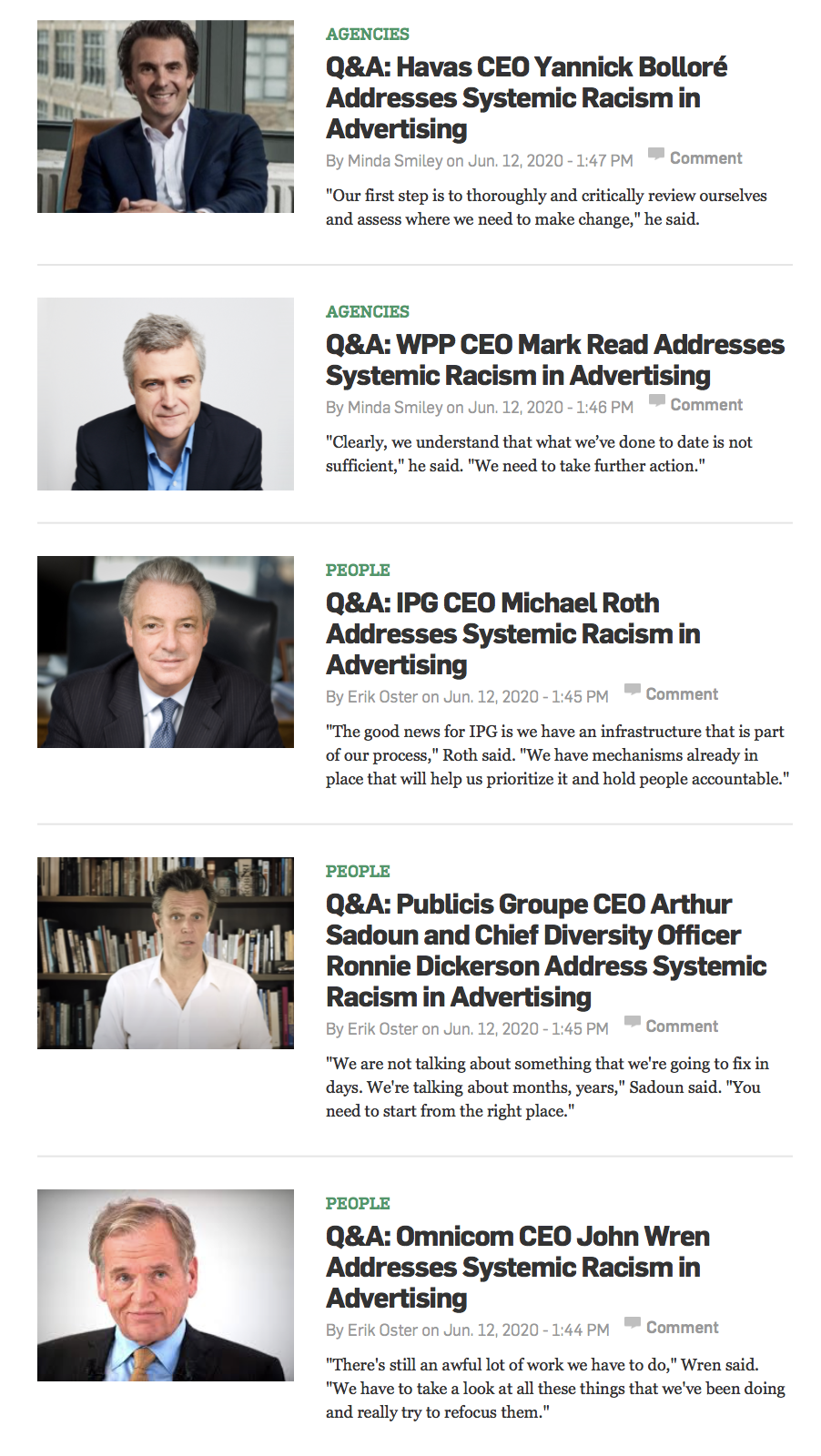 They have shaken their heads and formed committees and temporarily changed their logos on Linked In. They have spearheaded task-forces and vowed, this time, to fundamentally change that system of racism. They’ve even trotted out their new heads of diversity and inclusion or their heads of culture to show just how committed they are, this time, to make things right.

BTW, this article was from “The New York Times,” from over 601 months ago.

“Some of the city's top ad agencies, which were slapped around a couple of years back by the City Commission on Human Rights for their poor showing in minority group hiring, have now got ten a little pat on the back.

“"While the job is by no means finished,’ said Eleanor Holmes Norton, commission chairman, ‘the commission does regard the results of these months of negotiations by commission and agency officials as a heartening sign that progress can be made if the will is there to surmount obstacles.’

“Perhaps more important is the increase from 131 to 355 in the number of minority group members in professional job categories. That is an increase from 1.9 to 5.4 per cent, of today's total of 6,628.

“‘These figures,’ said the commissioner talking of the whole report, ‘show a definite improvement in the Opening up of this prestige industry.’”

This article is from over 300 months ago:

Edward L. Wax, chairman and chief executive of Saatchi and Saatchi Advertising Worldwide in New York, part of Cordiant P.L.C., outlined a comprehensive "diversity initiatives plan" to recruit, hire and retain more full-time employees who are black, Indian, of Asian descent or speak Spanish. With minority members comprising fewer than 10 percent of its employees, the agency industry languishes near the bottom of occupations ranked for diversity by the Federal Government.
"I honestly don't think there has been any conspiracy to keep our business white," said Mr. Wax, who is also the 1994-95 chairman of the association. Still, he added, "the fact remains that our poor performance is primarily due to one single factor: that many agency managements have not made a sufficient commitment to increase diversity in their agencies."

Then there are these two from 593 months ago and 604 months ago: 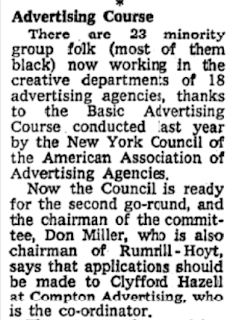 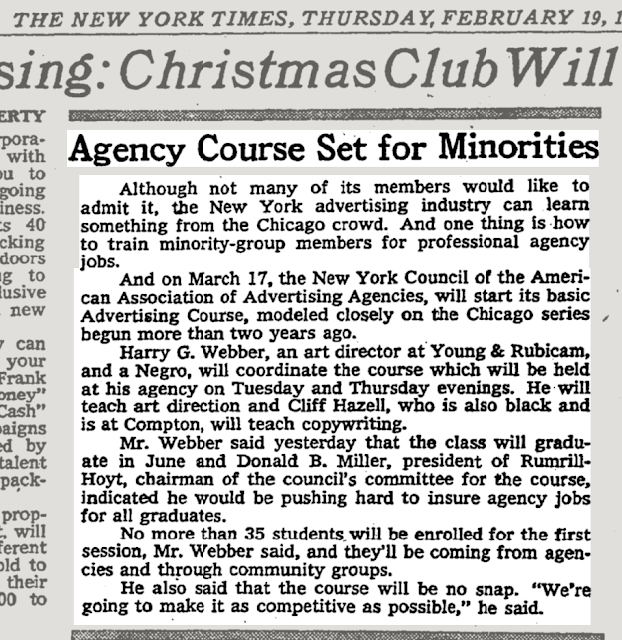 This article was from 599 months ago. Some large agencies, including my old man's thought spending money on "minority education" was more important than awards.
To quote Sarah Palin, 'How's that hopey, changey thing working out for ya?'

Here’s why I think today’s effort to bring more people of color into the advertising industry will fail like the ones cited about and about two or three dozen other efforts I recall from my nearly 50 years as a person conscious of the exigencies of the business.

Further, I’d bet not a single client would allow their agencies more time and more expense to make the changes necessary to begin bringing diverse people into the fold.

The question amid all the furrowed brows, corporate tsk tsking, finger-wagging, noble speeches and august committees is the same as it’s been for almost 60 years. Will you talk about change or will you outline a five-year plan with specific objectives and an agreed upon budget (preferably in escrow) to achieve those goals? Next, what will happen if those goals aren’t achieved? Will the holding companies and their chieftains have to forfeit compensation and pay fines?

Last, this humble blog, a one-man operation gets over 70,000 readers a week—most of them I presume from our industry. Any chance any of the holding company people I’m addressing in this space will actually comment? Or will you just pretend this blog doesn’t exist, and doesn't influence thousands of advertising people—in much the same way you pretend people of color don’t exist?