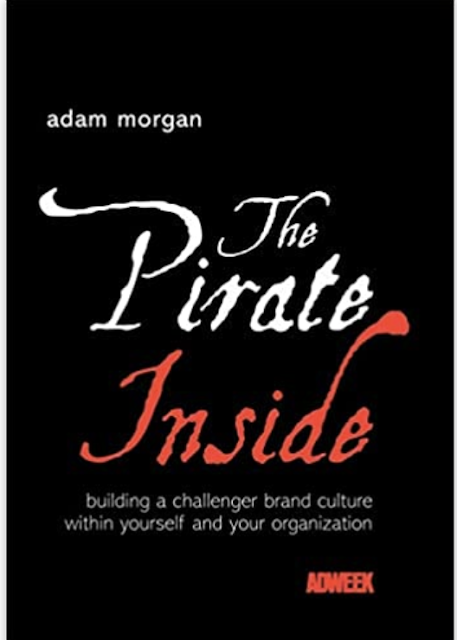 I don’t read a lot of “business books.” Generally, I’ve found they're written by people who aren’t in business or people who are longer on flamboyance than they are on substance.


What’s more, I’ve always been more of a “Plutarch’s Lives” kind of guy. Believing than most human and business and social-dynamic verities could be studied through reading the seminal works of seminal thinkers.

That said, a little over 21 years ago when I started my first stint at an agency no one’s heard of any longer, Ogilvy & Mather, I had a dot-com client, Mark Barden, who was also a famous planner. He was then, and he is now, associated with Adam Morgan, author of “Eating the Big Fish: How Challenger Brands Can Compete Against Brand Leaders." You can say "hi" to Mark here. I'm at least 93% sure he won't bite you.

I read Morgan’s book and liked it. Having come from a series of small, feisty agencies like Ally & Gargano, the idea from a marketing point of view of kicking a bigger, bloated competitor in the kishkas appealed to my street-fighter sensibility. You might say that some of the best of DDB, indeed, the best of advertising comes from that sensibility: Volkswagen, Avis, Chiat\Day's Apple and more. You cut a bully down to size.

Working with Mark Barden didn’t last long. The client itself didn’t really have a business model and when the dot-com bubble burst like a dam in a spring flood, the client all but disappeared.

But I admired Mark and thought he was both honest and smart. And challenging. So when he recommended—about 15 years ago—Adam Morgan’s new book, “The Pirate Inside,” I rushed out, ordered a copy and devoured it, I believe in one sitting.

I was in charge of a big, dumb, moribund agency at the time and with all my naively-derived myopia, I ordered twenty copies for senior people in the beige bureaucracy of what was hyperbolically called an agency. I’d bet fifty-cents, none of the twenty people I gave the book to ever broke the book’s spine, much less read any of its 350 pages.

It’s been a decade-and-a-half since I read The Pirate Inside. So I don’t really know if my memory of what I read is really what I read so long ago. Accuracy is not really important here. Nor is the provenance of an idea. What’s important is that some piece of Morgan nettled some part of my cortex and helped move my belief system.

What I got from Morgan is a characterization of behavior that is absolutely vital to creativity while it is simultaneously an anathema to modern agencies and the modern Vulture-Capital plutocratic Holding Company state. In fact, if you look at the current television news images of small citizens against rows of militarized, Praetorian and heavily-weaponized ‘defenders of the state,’ you’ll get the idea.

In the Pirate Inside, I learned that smart social organizations (i.e. agencies, corporations, fraternities, sororities, nuclear families) need a “denter.”
A denter is someone who, 'wants to put a dent in the world'.

Here are some key characteristics of denters.

1. They regard themselves as employed by the brand (or idea), rather than the company. Denters see the company essentially as little more than a financial resource - their real loyalty is to their brand. They set out to do only what is right for the brand.

2. Denters are not driven by careerism - they are not doing their job for the role that it will get them afterwards. They are totally committed to doing whatever it takes to make their brand succeed - even if in doing so they get on the wrong side of people who might seem important for their long-term role in the company. As such, many made it clear that they were not particularly concerned about whether they would still be with the same employer in 10 years' time. While they would not necessarily choose to leave, they were very confident that they could find a job elsewhere.

3. Denters are also embrace tension, rather than accept dilution of the brand vision or idea. They may not necessarily seek tension, but they neither mind it nor retreat from it when it is encountered.

4. Denters are defined as much by what they refuse to accept as what they have passion for.

In the HR-led culture of agencies and clients today, being a denter earns you that worst of all career-ending epithets. It’s the 2020’s equivalent of the whispering that you were a Communist in the 1950s. It’s been used against me.

“George is hard to work with.” “George asks too many questions.” “We ask George to do X and he does Y.” “George argues.” “George is like a dog with a bone.” “George is stubborn and battles for his point of view.”

If you can get your hands on the various vomitous assessment criteria found on most “Employee Evaluation Forms,” you’ll see phrases like these: “_____is a good collaborator.” “_____ seeks consensus.” “_______is a bridge-builder.”
Such personnel attributes might be beneficial in a pre-school environment, but in an environment that is meant to encourage energy, irreverence, insouciance and general creative mayhem, it is counter-productive bordering on stupid.

If you ever again wonder why so much work and so many workplaces suck and why so many so-called creative people feel like they’ve had the marrow sucked from their pliant bones, notice how smoothly everything is running.

There’s not a dent or a denter in sight.

Posted by george tannenbaum at 5:43 AM