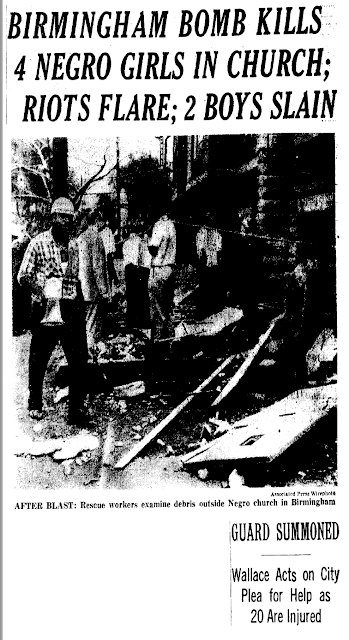 This is who we're fighting. This is who Trump is inciting.
People who bomb churches and kill little girls.
Who are never arrested and certainly never found guilty.

The almost half-a-millennia of murders. And abuse. And denial of opportunity. Of evil. Of wrong.

What can we do in advertising?

Beyond marching. Beyond raising money. Beyond shaking our heads.

To steal a phrase from, believe it or not, Grover Norquist, I think we can starve the beast.

Of course, there are a lot of beasts.

But I'm talking about the main beast--the Seven-Headed Beast ridden by the Whore of Babylon. That Beast.

No. Not just Fox News. Fox. Sports. Fox everything else. Anything that feeds Fox money--we must starve the beast.

Of course, clients can spend their money however they want. We can't stop them from advertising on, say, Fox Sports--which is different, presumably from Fox News.  That's their right.

But we can remind them, I think, that Fox Sports money feeds Fox News. If, 60 years ago you boycotted Woolworth lunch counters because they refused to serve people of color, how do you justify buying shampoo or clothespins or anything else at Woolworth?

I've written a lot in this space about advertising--a reflection of America--having become an "incrementalist" business. We make small changes and accept small results.

Smallness and incrementalism has been the course of American history when it comes to race. Even the Supreme Court's vaunted Brown decisions ruled that states must end segregation "with all deliberate speed." Vague and non-binding. And that vagueness gave white supremacists time to organize resistance.

If we as an industry have any backbone left, we must find a way to fight America's murdering-of-black-people-problem not with all deliberate speed, but by any means necessary.

In my opinion, this is not about running a spot about how much you care, or the latest tragedies. Anymore than fighting Covid was about creating some ridiculous hat forcing people to socially distance themselves or spacing out the letters of a logo. This also isn't about running a spot to show the goodness of your heart then spending tens of millions of ad dollars on various Fox shows.

This is about hitting the haters where it hurts them most. They have no souls. That leaves only their wallets.

The least we can do is call for advertisers to boycott the network that keeps hate alive, that magnifies hate, that amplifies and normalizes it.


Posted by george tannenbaum at 6:11 AM