About 46 years ago, it was 1974 if I remember right, a writer called Merle Miller published a series of interviews with former US President Harry Truman. 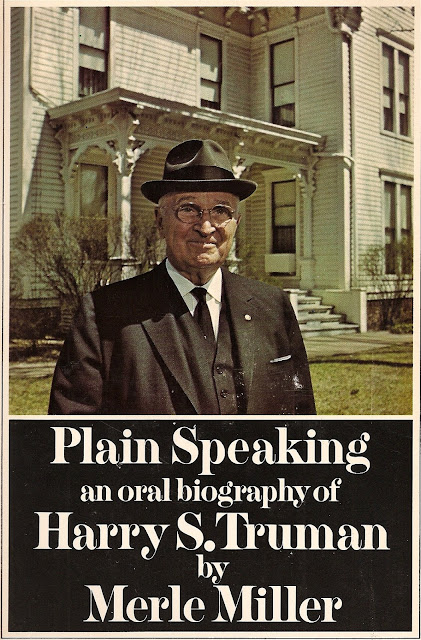 The book was called, "Plain Speaking," and in the gloomy months following the runaway dishonesty of the corrupt and anti-Constitutional Nixon administration, the salty and blunt candor of Harry Truman would be like the scent of mouthwash in the center of a garlic processing plant.

"Plain Speaking" was probably the first serious biography I ever willingly read and I loved it.

I don't remember much from the book, but I do remember that Truman believed that government bureaucracies grow virtually unchecked and out of control. They grow and get bigger to the point where their original reason for being is lost. Often along the way their bloat gets in the way of their effectiveness.

This is slightly beside the point, but up until World War II, the ratio of soldiers to officers in the US Army was about 10:1. Today, according to Havelock News, the ratio for is 4:1 for the Air Force, 5:1 for the Army and 5.3:1 for the Navy.

In other words, infrastructure has taken over intent. There are more people managing than fighting.

I think the same issue is visiting the advertising industry as well. Agencies in general seen their centers hollowed out. They're left with dozens of C-level leaders, half a score of presidents, and a legion of executive creative directors and then nothing for a fifteen salary bands and then multitudes of low-paid people.

What's more, in terms of loss of purpose, our simple business has grown unduly complicated. I just spent 15 minutes on LinkedIn and the One Club's job site. I don't recognize more than half the job descriptions.

I'll admit, I'm being obstreperous now and engaging in a bit of reductio ad absurdum. Everybody's job has value.

I believe that most marketing problems can be solved by a copywriter and an art director working with a good planner and a good account person to solve a problem.

That amalgam used to be the composition of an ad agency. Throw in media and support, and that's that.

Today, I think the agency world has gotten too complicated, too complex and has chosen to operate on the fringes. Rather than answering their clients biggest problems, we scatter our focus and try to do everything.

Just to mix metaphors, my two cents says, agencies are spending 11-cents to get the last dime out of clients. But they're making it up in volume.

I'm not even 40% sure of what all of the job titles above do. And last time I worked in an agency, you could shoot a cannon through the hallways and not hit anyone who could help a brand define itself.

More business for me.