I don't know who you are. 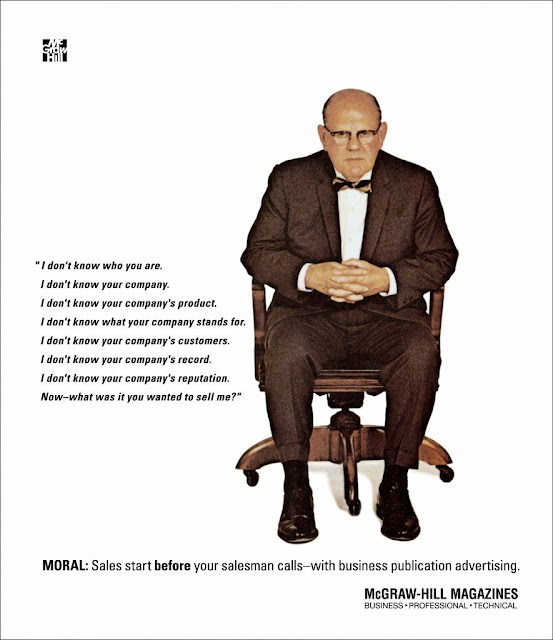 I don't know where I was or how old when I first saw the ad above. But I do know it was in the "book" era, not the digital era and as much as I wanted to, I couldn't rightfully tear the ad from the volume I was reading. Nevertheless, I made mental notes about it and stored it in my near photographic memory.
Some years or decades later, after making one of the many wrong turns that eventually add up to a career, I was the co-head of the flagship office of a big dull agency. We were pitching some giant piece of business and I remembered that ad and, having access to Google, was able to get my grubby hands on it.
I showed it to my assistant, a bright young woman. Instead of seeing what I saw, all she could see was the scary "school-teacher's face" of the man in the chair and couldn't even consider that that was part of the point of the ad.
Now it's 20 years after that moment which was 20 years after I first encountered the ad which was 20 years after the ad was originally written. The ad, in fact, was created by an agency I never heard of, Fuller Smith & Ross, and the man in the chair was an account executive who helped create the ad, Gilbert Morris. It first ran in 1958. A few months after I sprung from my mother's loins. If I can say that on a family blog.
Our current world is infected with a disdain for everything old. At least half the industry these days have never written an ad for paid media, and many of those in the industry haven't read, or understood, a single bit of anthropology. They believe that with every "new" thing, the wiring of humanity itself will change.
So, they believe people, for whatever reason, will want to have conversations with brands. They believe people will want to interact with ads. And they believe useful consumer information is no longer needed in order to buy a product. No, they proffer, without evidence. I will buy a $70,000 car because a sallow model drives it, or a drunk and philandering golfer or because they append the meaningless adjective "Joy," to the automobile's logo and call that a tagline or summary thought.
In fact, the stupidity of marketing professionals seems to be increasing even faster than global temperatures. And I say that on a 98-degree day.
Not long ago, for instance, the German automaker BMW inflicted on the world a minor logo update. Though they're ten years (at least) behind Tesla in making an electric power-plant, for whatever reason their logo is consuming thousands of employee-hours and, I'd assume, millions of dollars.
Here's the massive change. 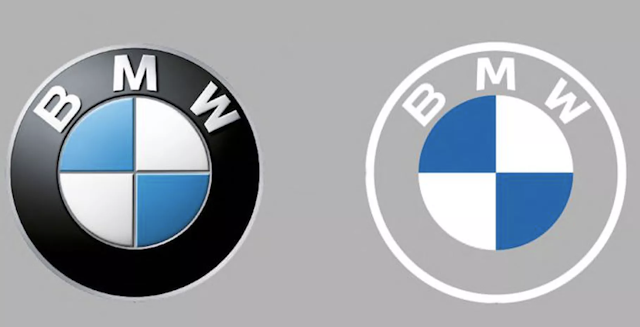 Here's what Jens Thiemer, Senior Vice President of Customer & Brand at BMW had to say about this brilliant communications apotheosis.

"[It's] more than just a design update: The layout of BMW’s new brand look and feel stands for the mobility of the future.

“BMW becomes a relationship brand. The new communication logo radiates openness and clarity. With this new transparent variant, we want to invite our customers more than ever to become part of the BMW world. In addition, our new brand design is geared to the challenges and opportunities of Digitization for brands. With visual restraint and graphic [sic] We are equipping ourselves flexibly for the wide variety of contact points in communication at which BMW will show its presence online and offline in the future. The additional communication logo symbolizes the significance and relevance of the brand for mobility and driving pleasure in the future.”

I suppose I do a fair amount on Mad Magazine-level parody on this blog. But even when I'm going to extremes I can't lay the bullshit on nearly as thick as good ol' Jens can.

I ask you, and I ask my friends in the design end of the industry, have you ever smelled more redolent fertilizer? It might even put Terry Southern, Peter George and Stanley Kubrick to shame.

My deepest belief is that 99% of all people feel about 99% of all brands as the man in the chair above does.

In brief, I don't know who you are, what you sell, or why you're better.

But rather than tell you what you want to know, lemme send out a puerile tweet and take 18 months to slightly change a logo while employing a raft of people who are categorically unable to speak without shoveling manure. That passes, today, for salesmanship.

Whatever you want to call our business today, communications, advertising, marketing, brand interface engineering, our most important function is to define who a client is and what they do and or sell.

Most people don't know, don't care, don't remember or are dealing with the awful and pressing vagaries of life--made worse by a cruel economic system, the crushing unequal distribution of wealth and a concerted attack on middle-class standards of living.

But I certainly agree with its first line.

And to all those people spending nine days to write a brief, maybe it's all as simple as answering that issue. We have to make people care who we are.

Posted by george tannenbaum at 1:02 PM