How to copywriterize for fun!!! And profit!!! 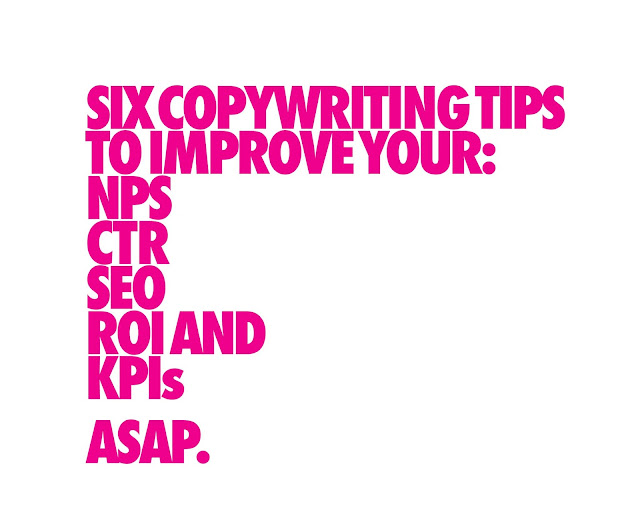 2. Don’t be afraid to break many of the conventional “rules” of punctuation. For. Instance. A. Way. Of. Showing. A. Certain. Emphatic. Tendency. Is. To. Put. A. Period. After. Every. Word. In. Your. Key. Sentence. Or. Sentences.

3. Write your copy as if you are writing to a friend. In writing an email, Dear FIRST NAME is a suitable salutation. Dear Easily-Gulled Carbon-based life-form, is not...unless demanded by the client.

4. No matter what sort of brand you’re working on don’t forget that you, as a copywriter, have a good idea of what the future will be like. Be sure to tell your readers that in the future will, inevitably, be massively different and unprecedented. eg: “In the wake of the unprecedented changes brought by the Coronavirus (COVID-19), lunch, your traditional mid-day meal will never be the same. We’re the Campbell’s soup company, and since we were founded way back in 1869, our mission has always been the same: to grind up tomatoes, add salt and water, seal it all in a can and serve it to you. We know that today, and into the future, this tomatofication process is important to you. And that’s why it’s important to the 268,000 people of Campbell’s who, together, today and into the future say to you what we’ve always said, ‘mmm, mmm good. Void where prohibited. All rights reserved. Any resemblance to any characters, vegetables, or vegetable characters real or fictional is purely coincidental.”

5. Use Action Words. NOW! See how immediate and actionable that was? Action words get your reader to ACT! Some readers, you’ll find, will also ION. That’s why Action words are called Action words—they impel people to ACT! and to ION! Also, never forget that your reader has the common sense of a teenager on Spring Break. If you’re selling something wholly unnecessary, ugly, defective or over-priced, fear not. Under those circumstances all you need is a strong “call to action,” (a call that moves people to action) and people will act. Selling a bag of bent and rusty nails for $73.99? No problem. Simply put the words ACT NOW! in a starburst somewhere—everywhere—in your ad. Presto, Buy-o!

Posted by george tannenbaum at 5:19 AM