There’s been, for a while now in my social media feeds, this exercise that seems fairly popular called “One Minute Briefs.”

I’ll admit two things about One Minute Briefs to be hyper-numerical about things. One: I know nothing about it, outside of you’re supposed to create an ad I think in just one minute. And two: I instantly disliked it because we shouldn’t be in the business of creating ads in one-minute. That denigrates our hard-won skills.

Without sounding more arrogant than I usually sound, most people will concede I’m just about the fastest copywriter around. One ECD once said to me, exasperated but appreciative, “You’re writing ads faster than I can read them,” and former Ogilvy CCO, Steve Simpson wrote this in his recommendation of me, “[George] knows that every word counts—especially if somebody’s paying for it. In spite of this, George is also a very fast writer: fast, clear and always on point. Fast and good are not incompatible, after all.”

I’ve even stolen the line here from the great New Yorker writer, AJ Liebling. I’m pretty sure not that many people who have worked with me would dispute my co-opting of Liebling, at least in this case. 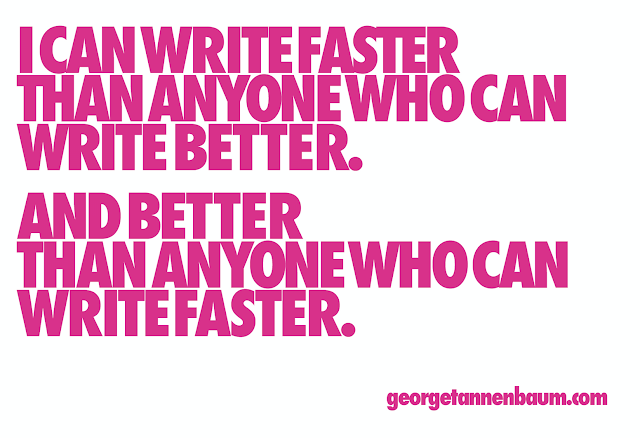 Nevertheless, briefs, I believe, should not be done in one minute—even when you have a good idea that quickly. As Milton Glaser said to me the one time I was fortunate enough to partner with him, “Let’s let it percolate for a while.” That’s wise advice in nearly everything—especially for tweeting tinpot would-be-autocrats.

Years ago I was showing work to a client. It was our first meeting and while I don’t reek of confidence, I knew the work was good. And I knew the client would be made nervous by it.

I played a piece of music as I presented and the client laughed.

I stopped the meeting.

“I laughed.” He was sheepish about it.

“I want you to remember that reaction,” I said. “Because in about ten minutes when I’m done presenting you will have found 32 reasons why the work is wrong for you.”

What I wish is simple.

That instead of wannabee creatives working on One-Minute Briefs, wannabee-better clients and planners and account people and creative directors would sign up for my very expensive advertising course.

I’m calling it One-Minute Reactions: The Art of Not Overthinking.

But it’s worth it.

After all, it’s only one-minute long.