Once again, she visits quite often, Dame Insomnia dropped by my queen-sized bed last night. Rather than toss about like a beluga whale in a tempest, to shunt her away, I opened up my Kindle app and plowed through to the finish of yet another book I was reading.

Reading for me is many things. When I'm on my high, hoity-toity horse, I call it my "restorative niche." I shut off the world--whatever is annoying me or oppressing me or chasing me like a Crusader after a heretic--and I escape to second century Rome, or a pirate ship laden with chopped chicken liver, or into the protozoa that eventually grew into life, as we know it, on this dying planet.

Reading is also a competitive edge. I'm averaging, during these benighted Dark Ages 2.0 days, more than a book a week. And despite the pointed allegations of my wife that I read the non-fiction equivalent of an Archie Double Digest, or the barbs from other friends that I read the same book about the Holocaust over and again, I read eclectically and somehow--whether I'm reading about Josiah Wedgewood, "the Radical Potter," or life when the world was lit only by fire, I find lessons and guidance for life today.

Reading is like carrying around various geniuses as friends. I have discussions, glean perspectives and I am given prismatic lenses that allow me a view of the world that lets me look at everything through little refracted bugs' eyes. I don't accept anything. I try to look at things in as many ways as my brain can. And if that's not the definition of training yourself to be a creative thinker, I don't know what is.

Five decades ago when I was a sullen teenager, as opposed to a sullen old man, my father phlegmed to me, "the world's smartest people read The New York Times' book reviews." That got me into a habit that abides to this day--when there are no bookstores. Adding to it, along the way, The Wall Street Journal's excellent book section, and the dozen or so reviews a week friends from around the world send me.

In fact, I challenge you to do the same. Try it for a week. If you're not, after a week, a more thoughtful, less compliant, more subversive and interesting person, I'll refund all the money you spent for this advice. 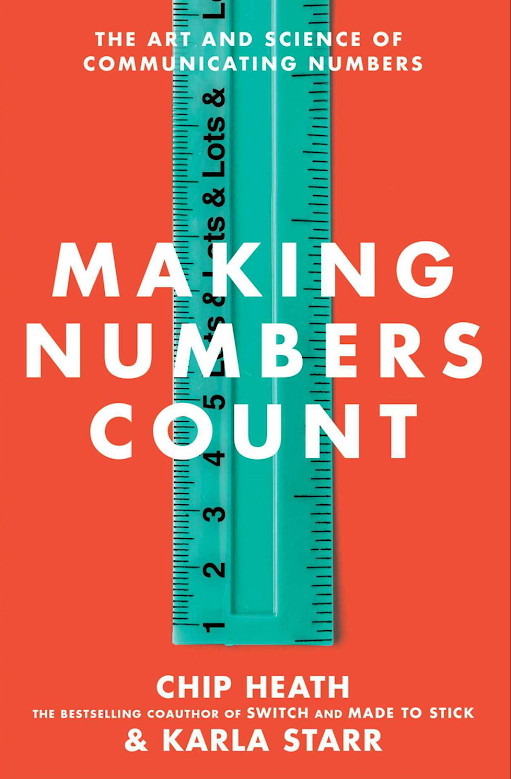 The book I read last night was "Making Numbers Count: The Art and Science of Communicating Numbers," by Chip Heath and Karla Starr. You can read, if you can elude the pay-wall police, a review from The Wall Street Journal here.

Here are just five simple examples from a book filled with dozens. Each one is about making information interesting, exciting, memorable and usable.

I'm glad I read Heath and Starr's book. But I'm sorry it was 200 pages, not just a 12-page article in the Atlantic, the New Yorker or Highlights for Kids.
I'm sorry that we have to have entire books that essentially say something we should have running through our veins. Especially the veins of those of us in the advertising and marketing and sales or any customer-facing pursuit. Like I said, I read the book in one sitting, but I can rewrite it in two words. Two words I think the entire communications world has fundamentally forgotten.
1. Be.
2. Interesting.
I remember back when Volkswagen's advertising was the best in the world going to the New York Auto Show at New York's piss-stench hulking Colosseum--where a pre-fab, day-light blocking trumpmerkinmallhighrise intrudes today. It must have been 1973 or 4 because it was the year the "Super Beetle" was introduced to America and the first time I saw amber turn signals.
A spokesman was showing a small crowd the turn signal. "It shines amber to stand out," he said. "And it has a special relay so the signal turns on the moment you flick it on."
OK. Big deal.
"You might not think that's important, but a conventional turn signal can delay turning on for a second. At 60 miles per hour a car moves 88 feet in a second. So our turn signal can turn on 88 feet earlier."
I don't know why that's stayed with me almost 50 years. And I don't know why we no longer, in our industry or anywhere else, work hard and respect readers and their intelligence enough to do that sort of elementary mathematics.
When you think of how many times you hear from verizon how reliable their network is and how little it registers--it's because no one at that giant company or its affiliated agencies is thinking about making a claim that's memorable. So, they cut and paste one for the billionth time.
When I worked on IBM servers, they often claimed to be reliable to an industry measure called five-9s. That means their servers were up and running 99.999-percent of the time.
OK. But what does that mean?
It means out of the 31,536,000 seconds in a year, your server will perform flawlessly for 31,535,684 seconds. It will need attention just 316 seconds a year, about 8/10ths of a second a day--roughly six blinks of your eyes.
You don't have to be a double-dome to do this math. It wasn't that long ago Hal Riney for Alamo said, instead of free miles, "there are over eight million miles of roads in Alamo country, and all those miles are free."
Or Dave Dye created this one. Nothing about awards, borderless creativity, working at the intersection of bull and shit and the seamless interplay of 9200 offices in 348 solar systems.
Just a focus on a compelling fact presented in a compelling manner.
i.e. be interesting. 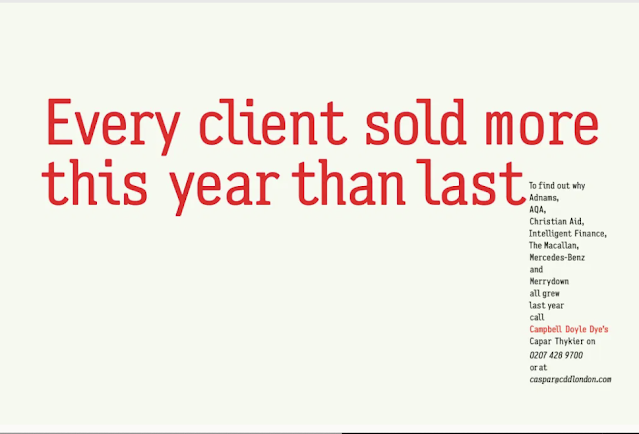