The practice of theory. I have to believe most people, even people as old as the oceans like me, don't know who Thorsten Veblen was. Nor do they know of his important book, "The Theory of the Leisure Class."

Way back in 1899, the Norwegian-born University of Chicago professor Thorstein Veblen wrote that ground-breaking study and critique of "consumerism" and capitalism. I don't know how academia regards Veblen today or his book. But I'd imagine it's just one more of those many volumes that people cite and never quite get around to reading. Like the Magna Carta or the agency handbook or the constitution if you're a republican.

Just a few moments ago I read, as I frequently do, an obituary in The New York Times. To my field of synapses, it never fails to amaze me how frequently you just happen to find something major when you're not looking. It's the openness of your mind that matters, not your hunting ability. Things actually find you. That's why, I think, so many special people have messy desks. The art of searching leads to the epiphany of finding. 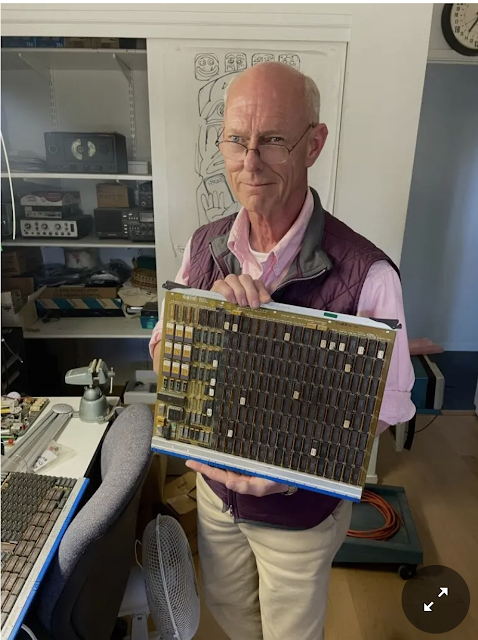 The obituary I'm talking about, which you can read here, tells of the life of David Boggs, 71, whom the Times calls "The Co-Inventor of the Ethernet."

I'm not a tech guy, but the ethernet, to my humble brain, makes much of what we call "digital" possible. The way I understand it, Boggs' ethernet makes it so we could transfer data across networks. It helps parse data into packets and transmits those packets either through wires or wirelessly. The ethernet assumed that some packets would be lost along the way, but somehow--don't ask me based on my cursory reading to explain this--because of redundancy, the show and the internet would go on.

If you're reading this now (how's that for stupid) chances are Mr. Boggs' technology ideas have something to do with that. The ethernet essentially made the word legible.

Here's the thing in the obituary that really got me. The life lesson I got from reading about someone elses' life.

In the early 1980s, Mr. Boggs took the stage at a California computing conference, to discuss the future of networking. A

technologist from a rival company to Boggs' questioned the mathematical theory behind ethernet. He claimed it would never work with a large number of machines.

You get a lot of that kind of aggressive doubt in advertising and marketing today. You'll be told something you wrote isn't emotional. Or it's too emotional.

Someone will rap your knuckles and say that there isn't a logo in the first four seconds. Or the URL isn't up long enough. Or the Kars 4 Kids pink guitars are the wrong shade of fuchsia. Or it won't get 'engagement.'

There are plenty of theorists who theorize about how to create work and where to propagate marketing messages. They'll produce decks as numerous as leaves on the trees and swear up and down those trees that if marketers only would only follow their baroque theories success would be theirs. They, almost tautologically, reject the marketing things that work and have worked for marketers since time began. That is impactful, artful,

intelligent, persuasive and ubiquitous work is really the only thing that works. In sum, make something good and run it.

I call that, apologies to Mr. Veblen, the Leisure of the Theory Class. It's borne by people who criticize, but they don't make anything. They are the gurus of our industry who seem to preside over people like me, a g(u)runt.

And somehow, someone at volume will question whatever you're proposing. And they'll have the theory to assert it won't work. Theory is always right because it has nothing to prove and is always right--look, I've proved it on paper. If a theory is wrong, you merely amend it and propose a 2.0. Or in the case of the Web itself, a 3.0. Which will be built with no more privacy, security or acuity than any previous version.

When Boggs was told his ethernet wouldn't work, he had the perfect, unequivocal response. A response we should all store for further use.

"Seems the ethernet does not work in theory,” Boggs said, “only in practice.”

About 100 years ago, I wrote two ads a week for a large retail bank in New York. An industry friend often talks about how he did the same for a group of restaurants.

There were no theorists around in those days.

There was something smarter: people with experience, judgment and taste.

They would say, "run that ad. And that one."

Then when the ads ran, you either saw a lot of people in a lot of bank branches or restaurants or you didn't.

We wrote ads. We didn't theorize.

We weren't smart enough for that.