A story about stories. For 98.7 percent of my professional life, I never heard the phrase storyteller. In fact, I never heard it at all, except from maybe when I was in nursery school or my kids were and we'd have storytellers come in to tell us about Mike Mulligan and His Steam Shovel.

But for about the last four or six years or so, everyone and everything has become all about storytelling. I think if you took every putative advertising person on LinkedIn and chose just the ones who described themselves as storytellers, you could quickly outstrip the population of China or India or both put together. Everyone is a storyteller and everything is about storytelling and great brands tell great stories and so on and so forth.

To my jaded ears, it all sounds like the next generation of teenagers who, almost invariably, think they're the first ones to discover sex. Well, the fact is, like sex storytelling has been around for as long as humans--approximately 200,000 years. And like sex, not everyone can do it and even fewer people are good at it.

I've heard UX people say they're storytellers. I've heard package designers say it. Even people designing signage in theme parks. It's a bit like advertising pompuspeople who call their commercials "films." No, my friends, Citizen Kane is a film. Shane is a film. Bad Day at Black Rock is a film. You make commercials.

OK. Enough of that. 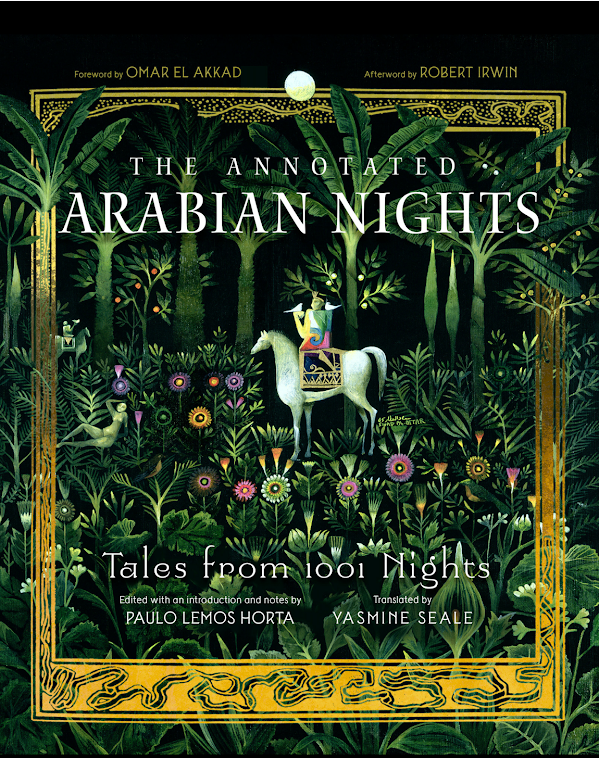 About three months ago, as I do, I read a book review in The Wall Street Journal on a new translation and annotation of the centuries-old book of stories "The Annotated Arabian Nights: Tales from 1001 Nights," edited by Paulo Lemos Horta and translated by Yasmine Seale.

Here are the first two paragraphs of the review--the reasons why I immediately dropped lucrative client business and ordered the eleven-pound book. I've underscored bits from the review because I have some points to make.

"In an empire long ago there lived a king who discovered his wife sleeping with a palace slave. Crazed by jealousy he vowed that henceforth he would marry only for the length of a night and each morning his new bride would be killed.

After he had carried out his wicked agenda for some time, Scheherazade, the brave daughter of the king’s vizier, demanded that she be the next in line to the royal bedchamber.

During the first night she beguiled the time with a fantastic story, breaking off at a moment of high suspense as morning arrived. The king agreed to delay her execution so long as she took up the tale the following night—and the reprieve was extended again, and again, until, after one thousand and one nights, the king saw the error of his ways.

That is the premise of what may be the greatest treasury of stories in all of world literature, which have now been newly translated by Yasmine Seale in a gorgeous illustrated volume, edited by Paulo Lemos Horta, entitled “The Annotated Arabian Nights.”

On display again is the spectacular panoply of storytelling, from tales of magic and wonder to murder mysteries to instructional fables to sexual burlesques.

I began reading "1001" Monday night, starting with its almost 100-page forward by Omar El Akkad. According to both the Journal and El Akkad, 1001 is a story that is really about the importance of telling stories. After all, as in the review above, for Scheherazade, storytelling is quite literally a matter of life and death.

If she is interesting, she lives. And thousands after her live.

If she is boring, she dies. And thousands after her die.

Booker Prize-winner A.S. Byatt says in the forward about 1001, “This story has everything a tale should have. Sex, death, treachery, vengeance, magic, humor, warmth, wit, surprise and a happy ending. ”

Like most writers--even those of us who toil in advertising--I believe in the power of stories. I've searched a lifetime and read and re-read foundation stories and the oldest and most seminal tales of Western literature, from the Iliad and Odyssey, to Gilgamesh, to Greek and Hebrew and Christian creation myths.

I've scoured the Canterbury Tales, the Compleat Works of Shakespeare, Cervantes, Dante, Petrarch, Plutarch and more. I've looked at and thought about what makes a story over-arching and important.

And, after all that, I'm annoyed by so many people in the business who co-opt and thereby sully the notion of story when what they're really doing is slinging a spiel. Usually for a BOGO sale. Or a Pontiac Door Buster Sale.

I'm all for storytelling in advertising. Brands like Nike, Apple, even IBM, have established creation myths and every additional message they produce--when they're on brand--adds to that myth. Nike has created "You. The Athlete." Apple, "You. The creator." IBM, "You. The Thinker."

With GeorgeCo., LLC, a Delaware Company, I'm running something more than just an agency. I'm helping brands find their story and even more important, helping them stay true to that story.

As above, in advertising we can learn from the great books. At the very least we can learn as Scheherazade learned.

Storytelling, whether you're a Vizier's daughter laying next to a psychotic king or someone guiding the fortunes of a brand in a dangerous and competitive world, storytelling is a matter of life and death.

Tell good, true, honest stories and you and your brands win.

As A.S. Byatt said, tell stories with "sex, death, treachery, vengeance, magic, humor, warmth, wit, surprise and a happy ending," and you won't have to shout at people, re-target them and cookie their every move.

Tell stories that are interesting and we live.

Don't and we die.

Posted by george tannenbaum at 6:43 AM