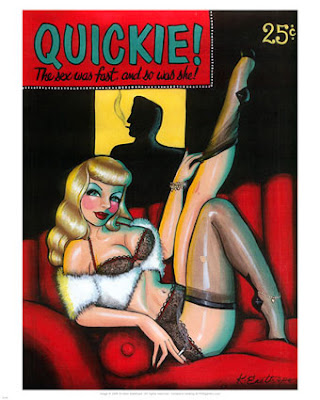 The trivial press, the celebrators of trivia and gossip and the banal, have pondered (as much as they can) what to call the years between 2000 and 2009. The O's? The naughts? A wag or two has snickered "the naughties." But as a historian, I have a bona fide suggestion, I'd call the just-finished decade "the quickies."

This was the decade in which every goal was achieved through a short-cut. Why train if you're an athlete? Take a drug--that's a much quicker way to get where you're going. Banks and oligarchs did the same. Why build a business when you can buy one and inflate your stock price in the process? Wall Street was all about getting rich quick--they embodied the Quickies. Why build real value when you can sell diseased money for the price of real money?

Why save for a home? Get one for no money down and then trade up after six months. No wonder half of America, not just the 9th Ward, is under water.

Our trillion dollar wars were supposed to be quickie romps. The quickies were promised to be the era of all gain and no pain.

Television and the movies did the same. Why waste time building characters and plots? Why write a script? Ladies and gentlemen, I give you reality tv. And movies. Is it possible to have more sequels than we ever had originals? Or in the case of Alvin and the Chipmunks, "Squeakquels." Get it? Haha.

Tweeting. IM. Facebook. All Quickie forms of communication. No depth. But who cares? IMHO.

Of course, Madison Avenue in its own feeble way followed suit. Holding companies grew exponentially, not through charging clients fees commensurate with their labors, but by buying and buying and buying all sorts of businesses that promised quick returns. No sense building a company through organic growth--that takes hard work! Just leverage the shit out of yourself and speculate.

Madison Avenue talent engaged in the same sort of quickie-ness. No sense creating work based on the understanding of a client's business and a need in the marketplace. Nope. Create a viral video of alcoholics talking about sodomy and ride that to the top (My boyfriend likes it in the can.) After all, when agencies hire someone for a top position, they haven't been looking for someone with a track-record. They've been looking for someone who could help them rebound quickly.
Posted by george tannenbaum at 1:57 PM