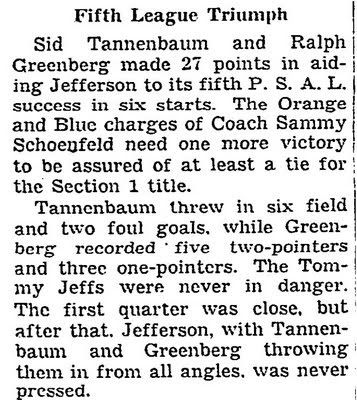 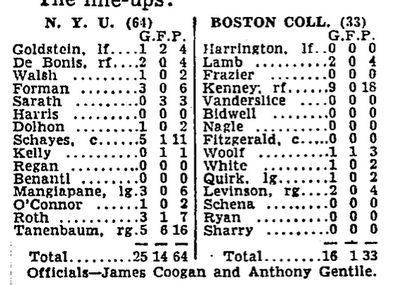 "I want to tell you something about this James LeBron," he parried.

"LeBron? LeBron is his first name? Not James? Oy, the schvartzas with their ferstunkeneh names. I'll tell you about a basketball player. Sid Tannenbaum."

"I'm sorry, Uncle Slappy, I don't know about him."

"Uncle Slappy, no offense, but LeBron James is considered one of the greatest players ever to play the game," I countered.

"You kids today. Sid was like a magician. Hands flew like birds. The best two-handed set shot I've ever seen. There was no defense against it."

"Have you seen LeBron play, Uncle Slappy? The man is unstoppable."

"Yeah, except during big games. Then King James is Schwing James."

With that, the old man hung up and my wife switched the TV to the Tony's.
Posted by george tannenbaum at 10:10 AM

My parents both went to Thomas Jefferson H.S. in Brooklyn. Wonder if they knew Sid and Uncle Slappy.

Bob, I stole the "couldn't wipe his tuchas" line from you...

your uncle is right.

typical proof how talent is far from enough.