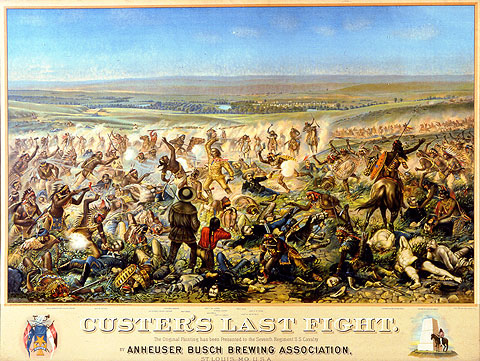 There is, near the bar at the Tempus Fugit just one piece of art work besides an old ad for Pike's Ale (the ALE that won for YALE.) It's actually a famous piece of advertising done  many decades ago by the Anheuser Busch Brewing Association. As such, until we entered our present era of pretend political correctness, copies of the lithograph used to hang in hundreds or even thousands of bars across the US.

DIGRESSION: I hate political correctness. People are no more or no less prejudiced than they were in any other era. But today we as a society teach everyone how to hide their hatreds under a phony mask of politesse. I think the world was a better place when the assholes were out in the open with their assholery.  Also, jokes were funnier.

Over the months that I've been going to the Tempus Fugit, I've spent a lot of time looking at the print. It's a pretty vivid and gory affair, complete with comic book cowboys and indians, mutilation valor and more. What's more, the print reminds me of advertising in 2013.

Let's say it's 1890 and your brief was to do a painting of Custer's last stand that could be hung in bars and saloons that cater primarily to an audience of men of legal drinking age on up.

You take that brief and come back (in three days) with something that looks like the above. Here's how it goes from there.

Oh, and in the spirit of true political correctness, there's this:

All characters appearing in this work are fictitious.
Any resemblance to real persons, living or dead, is purely coincidental.

PERSON 2: Yeah, it looks terrific. I love the colors.

PERSON 3: This is great.

PERSON 4:  It certainly answers the brief.

You begin to think, maybe, you're out of the woods. And then it begins.

PERSON  7: I love it, I think now we can really start trying to "push" it.

PERSON 8: Well, push the idea. The execution. We should think about it.

PERSON 3: I agree. We need to see how we can push this.

PERSON 2: Well, the Indians. Can some of them be space aliens.

PERSON  4: It would be good to have pirates, too. We'll be in some pirate books.

PERSON  5: We're not going to the client until tomorrow at 8:30, we have time to rework this.

PERSON 6: Yeah, I like the pirates and aliens idea. And we can add buccaneers, brigands and blackamoors. And maybe some Hell's Angels(R).

ME: It's supposed to be about Custer. He fought indians.

PERSON 7: Look, you're the ECD, you have to do what you think is right. But I want you to look these things. To push it.

PERSON 2: It's very violent. What if we're in kids' media?

PERSON  4: Do we need the guns? I like the scalping and the tomahawks.

ME: Scalping is gross. But that's what happened.

PERSON 7: Let's push it a bit and see if we can make it less violent. Like maybe there are balloons.

PERSON  4: I have a question. Which one is Custer?

PERSON 1: Good question. I'm not sure.

PERSON  2: I think he's the indian on the horse waving his arms.

PERSON 1: Can we do something that points to who Custer is? Makes it clearer? Just trying to push it.

PERSON  7: This is a crazy idea. What if Custer were holding soft ice-cream. You know, custard.

And so it goes.


Posted by george tannenbaum at 10:27 AM

Love this. It's scarily accurate.

Oy vey to that. See also