Be yourself. And then some. 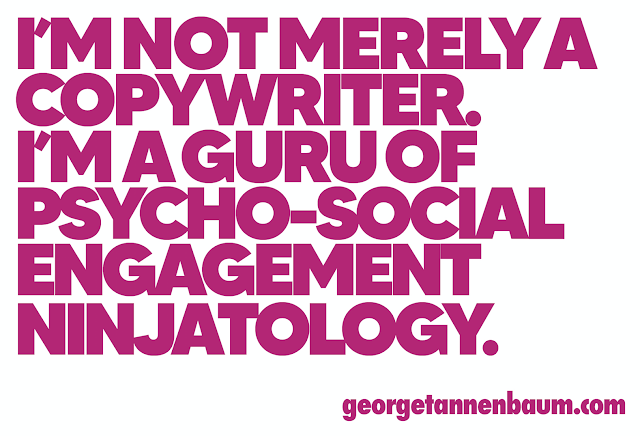 Almost 45 years ago I went to a party at someone's backyard in in one of the richest suburbs in America. Us kids, 17 or 18, had just accepted our admission into Columbia. Somebody's parent, presumably an alumnus, had about three dozen local kids and their parents over to, I suppose, be sociable and have a glass of wine or lemonade or a Coke.

Since I was knee-high to a cockroach I've never been much good at social settings. Even when sitting at a table at a dinner party,I always feel I'm between two or three conversations and never really in any of them.

Anyway, during this particular afternoon, I heard to rich old guys back-slapping each other and making with the marzipan conversation of a Cheever or an Updike. Even at 17, the plastic conviviality of the whole plaid and khaki afternoon fairly butterflied my intestines.

I heard one red face say to another, "So, how's business, Jack?'

The other red face chortled and said something like, "Busy as always."

The first guy replied probably as he had ten thousand times before, "Well, if you want something done, give it to a busy man."

For whatever reason, I stored that conversation away for over forty years and I thought of it today.

In my social network, which is fairly large, I have more than a few acquaintances who have all-too-recently lost their jobs. In advertising, this is a pandemic that dwarfs covid. Once you reach 40 or so, you're just another old gun-slinger who's pissed too many people off.

Someday, someday soon, someone in an expensive suit is going to be swaggering down a hallway walking slowly like Frank Miller in High Noon, and there's a good chance that she has all the bullets and you've nothing but an empty six-shooter.

You know the types.

Chris Wall, the great Chris Wall, described one such pissant as "A Titanic for an ego and a minnow in the engine room." What Chris didn't say and I will, is that this hydrocephalic minnows are Hydra-like. When one disappears, six or twelve regenerate from their blood. They're like the aforementioned cockroaches. The ones that will still be spawning well after the nuclear bombs vaporize poor fucks like us. They're out to fuck you, yes they are.

So now we're left with literally scores of talented people who have worked for scores of years and, like Willy Loman said, "A man is not a piece of fruit. You can't just eat the orange and throw away the peel."

Except they can. They do. They will.
And they get bonused for it.

How are old (40 year old) ad people any different from a crooked coal miner with arthritis, a broken back and black lung who's thrown out of work, out of company housing and left owing a lifetime of debt to the company store.

When I started in the business, my partner, Craig was younger than I but a very wise man. OK, a wise boy.

He said something to me that I remembered every day of my career.

"You never stop working on your book."

But things are different now.

Now it's "You never stop working on you."

This is not to say your work--your paying job, your responsibility to your clients and your team and your agency is unimportant. But it is to assert that you have to get busy.

If in the past it was enough to be like me, a headline machine. The guy who can sit at a table and turn out an eight-page manifesto, fully researched and writ, forty print ads and twenty TV spots in a 12 hour day.

You have to be a headline machine, yes, who's also a social media machine, a fake CEO, a Twit, an activist and someone who's created about twelve or fourteen online personas and seems fairly well-known in the US, the UK, Australia, New Zealand, India, Germany, Italy, and even Connecticut.

I don't like this bullshit any better than you do.

But if you want to play the game, you have to go for fame.