The struggle between light and dark. With apologies to everyone.

In the Manichean belief system adherents saw the world as a fundamental struggle between light and dark, between good and evil.

Manicheanism flourished back around 200 AD in the area we now call Iran. The belief spread widely throughout the Middle East and North Africa. It even spread to the town of Hippo, where St. Augustine was born. He was a Manichean long before he converted to Christianity.

The religion lasted for about 500 years. About one-hundred times longer than most agencies. And about, to date, twice as long as America. I'd be surprised if America makes it to 2270, wouldn't you be?

Manichea was subsumed by other religions and persecuted out of existence around 800 AD, though traces remained alive well into the 12th Century.

There's a lot of that dialectic going on in our fractious debates of today. There's an awful lot of "binaryism" in today's debates. You're either with us or against us. Love it or leave it. A real American or a coastal elite. It goes on ad frikken nauseam.

As a denizen of the ad industry, early on I had either the wisdom or the stupidity to embrace a sort of advertising catholicism. That is not at all a religious statement. Small c catholic means to "include a wide variety of things." To be small c catholic is to be "all embracing."

So while I've worked the bulk of my career in traditional advertising, I've also won a Diamond Echo, the highest award in Direct Marketing. And not only have I won dozens of awards for "digital" work, I spent two fairly miserable years leading an agency called Digitas and five years as an ECD at R/GA--someone's "Digital Agency of the Decade." I even spent two years leading the world's most celebrated events agency.

Of late--and I am partly responsible for this--there's been a shit storm around some statements by WPP's CEO. He trumpeted the ineffable advantage he enjoyed from a communications point of view of having 70% of his staff under the age of 30. And only 1% 60 or above.

As if youth bestows super powers of understanding and acuity that lessen with every trip around the sun.

What was missed along the way was what was most important and obvious.

Reaching people in a meaningful and effective manner for the purpose of changing a belief, a behavior or an attitude is not a function of any of the categories I mentioned above.

It is a matter of Bill Bernbach.

As everything intelligent in modern marketing is. (I wonder if WPP's CEO can cite one "Bernbachism," quote one DDB ad, or for that matter even one "Ogilvyism.") All that shit harkens back to the oh forget it.

Everything in modern marketing goes back to Bernbach. A broad statement to be sure. Though If you don't believe me, buy this book, as I did a decade ago. (Though not for $300.) 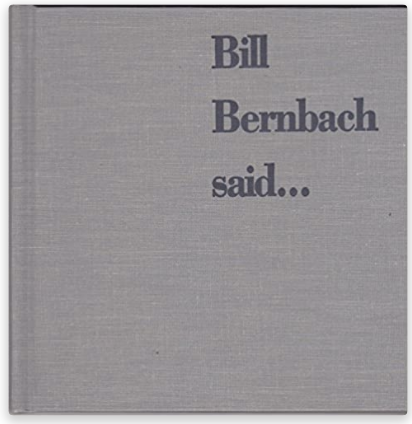 Like in this Apple Watch spot. It's honest. Informative. Funny. And it makes fun of "other." Humans like that.

It's not about age. It never has been. It's about finding those simple, timeless, human truths.

He's still searching for them at almost 80.

Billy Wilder found them from the time he shot his first great movie in 1930, People on Sunday, until his last in 1981, Buddy Buddy.

Just as there's no gender, racial, religious, sexual orientation requirement. Or anything else. Other than the ability to...think like a human.

There will always be Manicheans amongst us. Whether or not they know that they are. They're the people who say, as Zuckerberg said, "young people are just smarter." Or organizations in which only one person in one-hundred is over 60.

They look at the world as an "if-then" proposition.

I can see the appeal of that kind of over-simplification. It lessens the hard work, the unknowns, the failures that come from trying to do something different.

If you're under-scrutiny, you double-down on your efforts. You form a blue-ribbon committee. You appoint a Chief ______ Officer. You change the color pattern of your logo, issue a noble-sounding proclamation or two and in time, the whole thing will blow over.

It's a "what-the-fuck" proposition.

A "heaven help us" proposition.

As the great screenwriter Robert Riskin wrote in "Meet John Doe," "I know the world's been shaved by a drunken barber."

That's right. Any moment you can get nicked. Or just-as-likely get your throat slit.

That's not pessimistic, foreboding or dour.

It's a simple, timeless, human truth.

The kind of truth that defines our business.

The kind of truth I think our business has decided to run away from.

Just one last ditty. And I'm not 100% sure why it pops right now into my head.

Written by an early 20th Century sportswriter called Grantland Rice. Yeah, it's maudlin and Edgar Guest-y, but there's something <simple, timeless and human> about it.

Posted by george tannenbaum at 6:23 AM