I'm reading a book now that might sound a little weird for me to be reading. I'm someone who's barely spent an hour of my life outside of the sooty confines of a paved-over city. 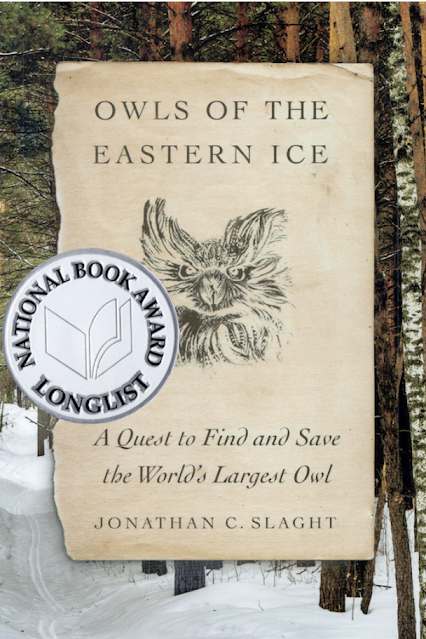 But "Owls of the Eastern Ice," was long-listed for the National Book Award and I enjoy not reading, now and again, about humankind's ever-accelerating descent into its current anti-Enlightenment abyss. And I thought after reading Isabel Wilkerson's "Caste," Rick Perlstein's "Reaganland," and the like, maybe I needed something with some pine scent to it.

Besides, I've always had good luck with books nominated by the National Book Award people and I push my long-autodidact proclivities to read as many nominated books as I can. It's a helluva lot easier since I don't waste time watching the current drivel that today passes for entertainment, news or culture.

One thing that "Owls" has pointed out to me is how people learn to "read."

Not words on a page, like we learned in first-grade or kindergarten, but how we learn to read other things. In "Owls" it's how Jonathan Slaght and his colleagues learn to read a forest, a riparian stretch of land, a river's substrate. They learn how to spot the domains of birds and other creatures.

They learn to see things other people don't see. Because after weeks, months and years of working, they learn how to read footprints, broken limbs, hollowed carcasses of poplars.

Not long ago I had a dalliance with a prospective client. I get about 20 such calls a week. Someone calls me and says "I need help." And "would I please do x y and z," for free as an assessment of their communication shortcomings.

Like a realtor can enter a house and in nine-seconds pinpoint why it's been on the market for 137 days, like a baseball coach can see four swings and say, "yes, this kid can hit," l can quickly look at a website and assess what's wrong.

I don't know every detail. But I know where the problems are and how to apply myself to fix them.

I got on the phone with this prospective client and he quickly blasted me for not having spent hours on his site.

I was pissed. And I let him have it with logic like the above. He backpedaled and ultimately, thank god, got a cheaper and less-good job done by someone else. But I think he understood. He just thought he'd be better off with someone more tractable, I suppose. Halavai.

Of course, agencies don't understand, nor do slow Read-ers who run Holding Companies.

A good advertising person can look at a company's office, a memo, a store, even an email footer and size them up like a good boxer can assess his opponent after a few jabs.

There's always unseen stuff, of course. And nuance and depth. But just as I, with no formal musical training can hear a few strains of classical music and zero in on the composer, a good, experienced ad person can do the same.

In fact, last night my wife and I watched Jeopardy! The final category was announced: 19th Century Supreme Court Rulings and then they broke for a commercial.

My wife said, "How did you do that? You knew the answer before the clue." It ain't an IBM Watson thing. It's just knowing how to read the game.

There are only three 19th Century Supreme Court rulings in Jeopardy-level questioning, in order of probability : 1. Plessy vs. Ferguson; 2. The Dred Scott Case; 3. Marbury vs. Madison. My guess is the likelihood of those as answers would be 88:8:4.

That's what comes from a lifetime of experience, of listening, of learning and of thinking.

When Holding Company slow-Readers boast that 75% of their staff is under 30--when apologists assert that that's all their "razor-thin margins" can abide, that's what they've thrown out.

Not just high-salaries and old age.

Worse than that: they've thrown away their agency's ability to read.