There are a lot of things that are true of everyone in advertising
--and in life--that virtually no one likes to admit. I've been noticing them since I played minor league ball for the Seraperos de Saltillo in the Mexican Baseball League in the Summer of 1975.

1. Everybody is afraid. If you doubt it, read sometime, "Something Happened," by Joseph Heller. I learned it when I played ball. Everyone is afraid everyone else is better than they. Or they'll find out you can't hit a curve. Or your arm aches and is noodle-strong.

2. Everybody is afraid 'they don't have it anymore.' The mean people lash out to hide that fear. The good people work harder.
3. Everybody wants to hear they've done a good job. From their supervisor. From their client. From their co-workers. This is human nature. It's a spiritual hug. And all too rare.
4. A raise you didn't ask for is worth 5X the raise you had to fight for. Most people would be happier with a check for $5,000 and a handshake than $25,000 they waited and waited and waited for.
5. Agency attrition would be cut by two-thirds if management read points 3 and 4 above.
6. The first job of senior management should be to leave their offices and walk the floors. They should see how people are doing. Talk to them. Listen. Not hold contrived breakfasts where no one can really speak their mind. Many "C-level" people don't know the people working for them and don't take the time they need to to know them. In fact, they hide in their offices. It's hard to be considered a leader if you don't know the people you're allegedly leading.
7. You can tell a lot about an agency by its bathrooms. If they're filthy at the end of the day, something's wrong. People are missing "pride of place."
8. The timesheet police do more damage than good. Getting ALL CAP memos containing half-a-dozen threats from people you don't know is bad for morale. In fact, management is usually so distant from the people making them rich that time-sheet memos are for many people their only connection with corporate.
9. Most agencies regard laughter and joking as a sin. It should be what they strive for--a release of pressure and expression of joy. In the old days of baseball people described the Yankees as 25 guys taking 25 separate cabs to the stadium. A team with laughter plays better ball.
10. Work would be much better if agencies allowed dogs. Even with the occasional accident.
11. Everyone in creative should have to create. Even CCOs. It's how creatives stay sharp and show their skill. I don't mean they should "tweak" or supervise. They should start with a blank sheet of paper and make something.
12. Good work and good news should be celebrated immediately. Preferably served with milk and cookies.
13. Bad news should be revealed immediately. Preferably served with milk and cookies.
14. People should be recognized for their achievements. On a short, sincere, well-written memo. On paper. Placed on everyone's desk. 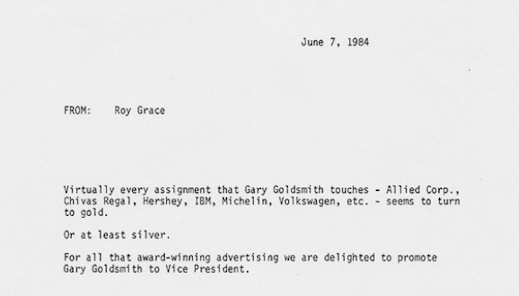 15. People who are chronically-late are malevolent. They're disrespectful to others and convey a "my shit don't stink" attitude.
16. Employees should be introduced to their department on the day they start in a memo that's delivered before they start to the whole department.
17. Same thing for promotions. Announced widely the day they happen.
18. Creative and Account floors should always prominently display work from each client for all to see. If you're not proud of the work, why are you doing it?
19. If senior executives take black cars home they should walk two blocks from the agency to get them. Especially when the rest of the agency is under "wage freeze or rollbacks" and people are being fired. It's bad for morale.
20. Random acts of niceness are important. Every once in a while, do something nice when no one's looking. Management should show they care.
21. Sound-proof conference rooms. I always hated seeing signs around the office--"New business meeting in progress. Quiet." Agencies are supposed to be boisterous and fun. If you need quiet, go to a quiet place.
Posted by george tannenbaum at 6:08 AM