This is what you're up against.

In his great essay, "Politics and the English Language," George Orwell lays out "Six Rules for Writing." More than any other advice, I hand out Orwell.

He's a little like a sock in the jaw. But most writing needs a sock in the jaw. I've been telling people about this essay for three decades now. In that time, maybe five people have actually read it. No one, I believe, has pdf'd it and saved it on their desktop. I don't really understand why.

I've told whole agencies and whole creative departments to read it. I routinely pass it out to clients who ask me to help their in-house agencies. I still don't think anyone's read the essay. TL/DR. That stands for, I believe, terminally lazy, dumbness remains.

Orwell's sixth rule is the one I'm going to start with today. It says, "Break any of these rules (the previous five) sooner than say anything outright barbarous."

So many of the ads I see today are outright barbarous. Ugly looking, ugly sounding and ugly lying. Ugly to the point where they actually anger me. And make me hate the brands who besiege us with these ads. (I'm not sure clients or agencies understand this is how their ads are evaluated. People don't sit at home, see an ad and remark how it followed the brief. They don't notice, really, anything. Except once in a while something makes them smile. Much more often, when they notice at all, it's something that irks them.)

I have every privacy apparatus known to humankind on my Mac. I have IP-scramblers on my home network because 1.) they're inexpensive and 2.) I don't want to be followed around by brands like I'm a rare leopard being tracked by a great white hunter. Not only do I employ the ad-blocking equivalent of Hitler's Atlantic Wall, I use a special internet browser that is also configured to not turn me into commerce. Even when searching I avoid Google and use a privacy-attuned search-engine.

Nevertheless, like toxic effluvia leaking through supposedly hermetically sealed lead-lined crypts, ads still get through my defenses. As Neil Young sang so many years ago, "Rust Never Sleeps." Neither do surveillance capitalists.

Fortunately, to the right of these offending ads on LinkedIn, there are usually three tiny dots. Click on them and they allow you to "report" ads. And I often do.

What I wonder is this: How many creatives, how many account people, how many agencies and how many clients even know these three tiny dots exist?  Because to my mind, like a cowboy in the Old West who always carried two six-shooters, most people know they're armed with these defenses. Those three dots lead to this menu. 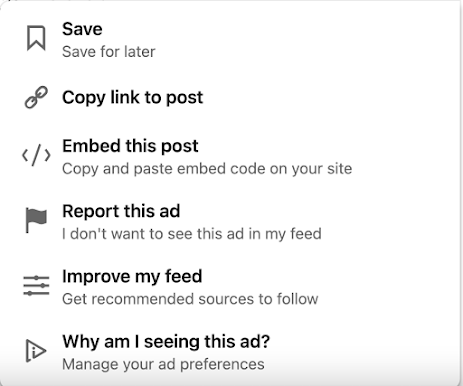 Click on the grey flag, and you get to a screen that gives you these options: 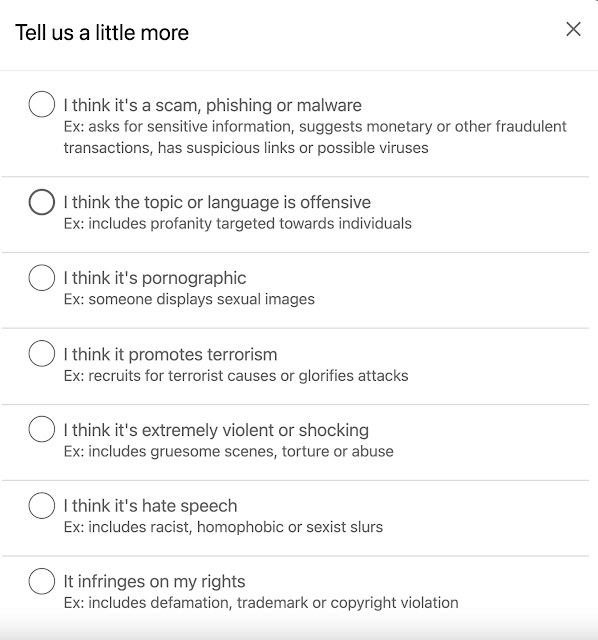 I almost always click on one of these options. My rationale for choosing #1, "Scam, phishing or malware," is that the ads I'm "served," are usually so rife with hype and overpromise--or built on such false premises, that I believe I'm being scammed.
Sometimes I choose #3 or #4. Especially if the ad is from a petrochemical company promoting its love for the environment and its efforts to go carbon-neutral by 2080. "Terrorism," or "violence." Environmental despoiling is eco-terrorism and violence against our planet. So I feel justified in my judgment.
Once in a while I choose #5, "hate speech." Because, like Orwell, I think ugly language, treating people as if they're numbskulls is hateful. I feel fully justified in picking this option.
I don't have any data on:
1. If my personal efforts have any effect on the ads I see or the advertisers and agencies involved.
2. How many people take the time, or even know that they can "thumbs down" dumbness and lies.
3. If LinkedIn publishes data on how many people are rejecting their ads.
But my point is larger. I hope.
Semiotically, every viewer is looking at every communication--even the falsehood-choked PR-derived bullshit from corporate communications and "best-place-to-work" income-generating contests, through this lens.
When I see an ad like the one below, I report it in my head. Most often, it's so full of lies, half-truths, deceptions and bushwa that a large portion of my corpuscles grow dyspeptic.
As I've written many times before, I'm a bit of a Manichean. I believe as David Ogilvy did that "the consumer is not a moron." Most brands and agencies behave otherwise. And most people know it. Light or dark, that's how I see things.
So whether they tell you or not, people are looking at your messages much more fiercely than they pretend they do in focus groups. Think "black site" torture moderator or Upper East Side therapist.
It only takes a second to lose someone forever.
I used to think about the American auto industry. How its decades of making cars that sucked and treating customers like shit cost them literally generations of Americans.
Since about ten years ago, Plymouth, Oldsmobile, Saturn, Pontiac, Mercury, Hummer and Saab have all gone belly up. They lost their customers forever.
Because they lied.
Or half-truthed.
Or were unvarying in their prevarication.
I think most companies--and agencies--are following that pattern.
But, they'll counter, we're award-winning.
I'll counter, you lie.

Posted by george tannenbaum at 5:59 AM