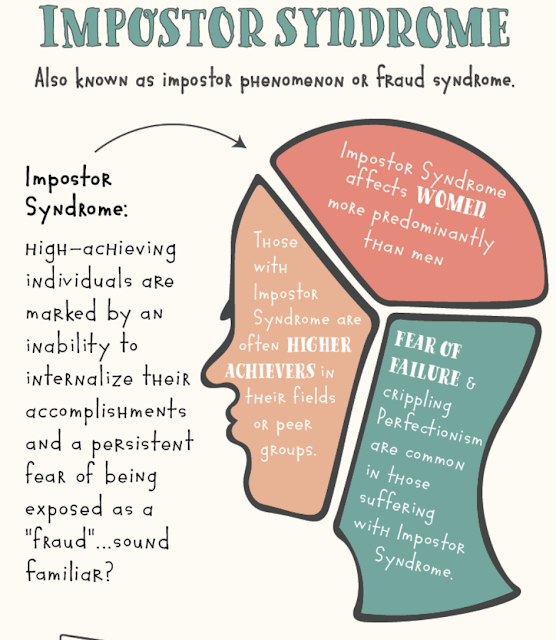 The phrase that pays today,  in what seems like everyone's every conversation, is "Imposter Syndrome."

We say Imposter Syndrome as if it is new--not just an old friend with new nomenclature--and most of the people uttering the phrase seem to think they're the first ones in history being affected by such.

All this is silly: That Imposter Syndrome is new. That Imposter  Syndrome hasn't always existed. That Imposture Syndrome is not universal, that it somehow affects women more than men--and it scarcely hinders white men at all because we are powerful and all-seeing and control the world with no lack of confidence and absolutely no self-doubt.

That everyone is stricken by some order of Imposter Syndrome and those who say they aren't stricken by it are a) liars, b) sociopaths, or c) lying sociopaths.

Maybe I am missing, because of my white maleness, some of the modern and female nuances of Imposter Syndrome, in which case call this blog an imposter itself and stop reading. But my sense is that everybody thinks they suck, that they can't do the job, that they have too much work and everyone around them is smarter, better-looking, faster, more-connected and harder-working.

Everyone walks around with the monkey on their back that it's only a question of time until they are outed, kicked to the curb and living off old coffee grinds and orange peels pilfered from a fetid and dripping dumpster.

Knowing what I know, seeing what I've seen--playing ball and playing advertising, having spent four-fifths of my life on a psychiatrist's couch and having read enough history and biography to put the most-vaunted PhD to shame, I can't for the life of me see how Imposter Syndrome is new in anything but name.

Even great current-day imposters, Bernie Madoff, Elizabeth Holmes, Donald Trump and countless others, who through lying and sociopathy seem to be "over it," I'd guess are neck-deep in spiritual shit and have the self-worth of a crippled grub.

So with all that being said, here's my short guide to, not conquering Imposter Syndrome, because you can't really do that. But learning to live with it. Because you have to do that.

1. Find a mantra. A series of words, a poem, a Bazooka Joe comic that rallies you when you are shaky.

Henry Wiggen, the great ballplayer for the New York Mammoths, would say to himself, "don't worry about being a country boy. We're all just country boys. Even those of us from the big city." A mantra is not a Hallmark card. It's something extracted from your marrow that works for you. Mine--this cost me almost $1 million in therapy bills is, "Your good is other people's great."

In other words, I can always find something wrong with what I did. I can always immobilize myself and subject myself to paralysis by analysis. However those six words free me to let go and move and move on. They don't make me believe. But they make me let go.

2. Get up early. This might be more prophylactic and less material, but until your self-doubt is bottom-drawered get up early and start work before anyone else. If some barrel-chested pomposity attempts to lord some fucking wisdom or talent over you--you have push back. You've been working while he was wet-dreaming.

3. Write. Stop talking about ideas. Have them thought out, writ out, with options, and visual stimulation attached. While others attempt to Imposterize you while talking about what they will do in the future, you have and can show and defend what you do do right now.

4. Find a fan club. As a person who grew up being physically beaten on an occasional basis and emotionally beaten almost as often as I aspirated, you have to find people who don't know that about you. Trusted sources who can "hold your hand," and give you some emotional ballast when you are listing.

I've always become closest to agency planners. They're usually the smartest people in agencies and have the least agenda--ostensibly because they're on no one's side but the consumers'. If they endorse your work--it's probably not just ass-kissery. Same for agency producers. They know what makes good TV and know what directors are looking for. They're also a greater distance from creative department dick contests.

5. Question blanket statements with your knowledge. When some cock-of-the-walk says, "this won't work because..." be ready to say, "it worked when Chiat did it with _____. Or when Wieden did it with ______." Most put-downs are about as well-founded and substantial as the foam on top of an airport lounge latte. They're an ass' parry and thrust. Be ready with defense. En garde.

6. Press the send button. Once you've done something, breathe with it for a few moments. Take a walk around the office or around the block. Then send it. Pressing the send button is an irrevocable semiotic way to show confidence in yourself. You believe in your work enough to send it. Use the send button to your advantage. It is better to have loved and lost, that kind of thing.

Maybe this is all wrong.

And too white male.

Maybe I'm not understanding or not sensitive or don't get today's modren meaning of Imposter Syndrome. For that I apologize. I'm just an imposter.