Edward Hopper at the Whitney. 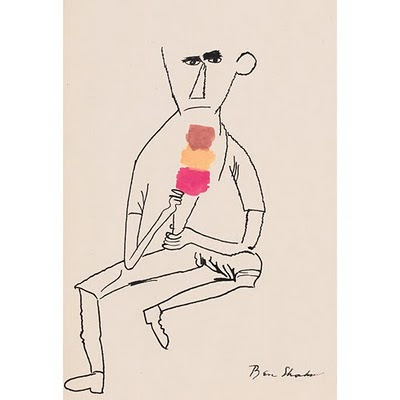 My wife and I dropped in on the Whitney, the perfect thing to do for an hour or so as the first sun and mild temperatures in about a week begin to slushify the city. Admission was even free because my wife and I both work for Interpublic agencies--a rare holding company benefit. The Whitney owns a total of 2,500 Hoppers (they must multiply like rabbits) and this show showed about 75 of them, including "Early Sunday," and "Mobil Gas."

There was also work by George Bellows, "Dempsey and Firpo," photographs by Steiglitz and some Ben Shahn's.

I always had a weakness for Ben Shahn, maybe it was the radical socialism of my mother, maybe the indelibility of his green-faced "The Passion of Sacco and Vanzetti." In any event, the Shahn shown here wasn't in the Hopper show, but seemed the perfect painting for a day with allusions of Spring in the air.
Posted by george tannenbaum at 2:43 PM

I always wondered why he looks so unhappy despite the ice cream cone. Is he contemplating dropping it all? Or is someone approaching trying to take it away?

Probably has something to do with his mother.