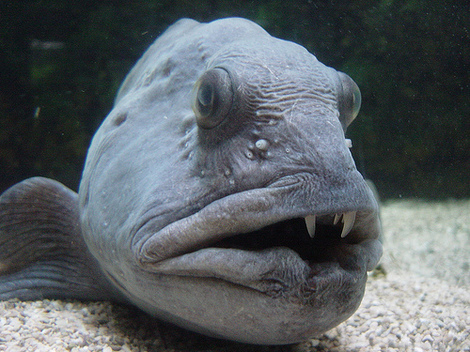 Since I was fired six weeks ago, I've learned a lot.

Most of all, I've learned not to panic.

Sure, the rug was pulled out from under me. And I thought, given the near-sanctity of my relationships, work and reputation, I would be spared.

This might make no apparent sense to anyone but me, but somehow I'm reminded of David Foster Wallace's 2005 commencement speech at Kenyon College in Gambier, Ohio.

As someone who's spent nearly 40 years swimming in various agency ponds, I never really thought too hard about the water. Maybe I was too busy doing what I thought were the keys to survival: doing a good job, raising my hand, over-delivering, and yes, helping others build their careers and portfolios.

I'm not sure I took enough time thinking about how the water was.

About four years ago, my first boss in the business, back when ECD meant you were an Executive, a Creative and a Director wrote me a note. He left the business back in the late 80s to write movies, TV shows, plays and a series of successful novels, many of them New York Times best-sellers.

"George," he wrote, "are you chasing the same dream at 60 that the 25-year-old George was chasing." That's essentially, "how's the water," isn't it?

But I was too busy being a good corporate citizen to notice the water. I was skipping vacations so I could douse a brush fire. I was skipping other vacations so I could douse a wild fire. I was giving and giving and giving. Misguidedly thinking that even under today's prevailing winds, even the most avaricious of corporate entities would be guided by at least a scintilla of the Golden Rule.

That is, they would be good to me in return.

I know we don't get wet when it rains and we don't end our careers with black lung or in a mine disaster. Nominally we're allowed to laugh at work, we can put our feet up on our desks and wear torn jeans if that's our thing.

I never had to lift anything heavy. It's hard to wrench your back when all you do is type for a living.

That's all good, I suppose.

But when you're old like I am, and when you've been working most every week of every year for 39 years, maybe you don't realize certain things.

Maybe there are better ponds than the ones I've been swimming in. Maybe with more temperate water, a little more room to stretch, and maybe a little bit more appreciation.


Posted by george tannenbaum at 5:41 AM 0 comments

Beethoven. Picasso. Raymond Chandler. And a set of dull knives.

A couple of weekends ago, maybe it was cold and wet outside, my wife and I stayed home one night and put our feet up. Whiskey was walked and tired, the kids are all right, our fridge was full--there was even ice cream in the house. So we stayed in.

Our apartment isn't much, but it's cozy and warm. We're not slip-cover people, or antimacassar people, or the least bit fussy.  Our place is more comfortable than stuffy.  It's perfectly acceptable to kick off your shoes, fill a glass with seltzer and just chill.

Adding to that comfort for whatever reason, my ever-lovin' has allowed me to follow my predilection and line our living room with floor-to-ceiling bookshelves. I am never without my closest friends, my books. Friends even if a preponderance of them do involve the Holocaust, the Black Death and the rise of the theocratic right.

We were doing something all-too-rare today--we weren't watching anything. Instead we were listening to New York's only classical music station, WQXR.

I've been listening to the station since I was a kid. My harridan of a mother always had it on. Back during my youth, WQXR was "the radio station of The New York Times," and my mother would listen to, in addition to music, the news and, more important in those pre-internet days, the closing prices on the New York Stock Exchange.

The announcers would drone on and on. "Consolidated Amalgamation, thirty-two and a half, down an eighth. Poughkeepsie Woolens, nineteen, up a quarter. Environmental Despoliation, twenty-two and an eighth up three points." And so on.

Also doing my childhood, they would read off the casualty lists from Vietnam, which was raging. The dead and wounded tallies from the North, the Viet Kong, the South and American forces. Even as a pre-teen I could tell we were being lied to. I don't know how I knew; I just did.

This evening, however, deaths--no matter how present during our current imperial hegemony--weren't being reported on. Instead WQXR played Beethoven's Moonlight Sonata. The simple, slow, opening notes. Transfixing.

I don't play the piano, or any other musical instrument save the ocarina, but Beethoven's score seemed so stripped down and unembellished it was as if it was being played with one hand, or even just a couple of fingers. (I'm told that's wrong. That it's a very complex piece and you need almost virtuosic skill to play it properly. That's not the way it seemed to my uneducated set of ears.)

My wife, always an adroit observer of the passing parade, remarked on how basic and elemental the piece seemed. I asked her if she had ever seen Picasso's Bulls.

I handed her my laptop and showed her the sequence here: 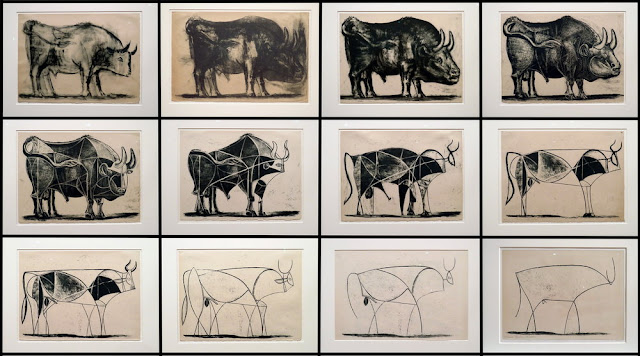 To my mind, it's especially important to pay a moment's attention to Picasso's last bull.

It's those opening notes of the Moonlight Sonata, rendered in a taurine manner. 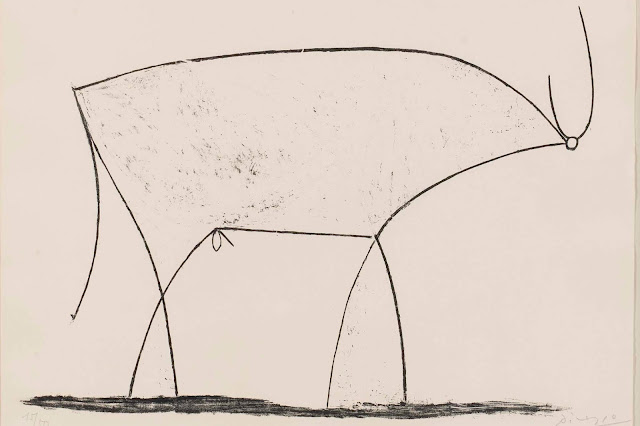 My wife is an excellent copywriter. And since we both make a living with the tips of our fingers, we wind up talking, probably more than we should about the vagaries, the frustrations, and the rewards of our profession--or craft, if you want to get deep-dish about it.

"The simplicity," I said.

She looked at me, bored. I thought of a particular line from Raymond Chandler's "Farewell My Lovely."

"On nights like that every booze party ends in a fight. Meek little wives feel the edge of the carving knife and study their husbands' necks."

"The simplicity," I repeated. "That's all you need to know about being a copywriter. Keep working until you can make it that simple."

Then she glanced at my carotid, walked off to our expensively re-done kitchen and looked lovingly at her set of Henckels knives, nestled snuggly for now in their butcher block home.

Posted by george tannenbaum at 5:22 AM 0 comments

A lot of words on words.