“Herb Goldberg,” Herb Levin began, “he played the guitar. He was a regular Charlie Christian, or Barney Kessel.”

“He could play,” I added, letting Herb know I knew my jazz guitarists.

The old man took a sip of coffee from a small elegant cup, then rested the cup back on its matching coaster.

“Cold,” he said, then sipped at it again. “Herb Strauss, he played the bass guitar. Herb Schlesinger played the clarinet—the second coming of Benny Goodman. And I played the saxophone.”

“Then there was your dad,” Herb Levin continued, “He played the drums and we practiced at his house.”

“How did he fit in,” I asked. Like me, my father wasn’t much of a joiner. In fact, I can scarcely think of anything in his life that he joined. And I am much the same. I hardly get into an elevator if there’s someone in the car before me.

“Like I said,” the old man continued. “We’d practice in the parlor of your grandmother’s apartment. She was nearly deaf and didn’t mind the racket.”

“I’ve noticed a lot of music lovers are deaf,” I joked.

“Politicians, too.” He paused, I believe for effect. “And wives,” he said as he padded to the kitchen and filled his cup with another dollop of coffee—this time hot.

“We were big in West Philadelphia in the 40s. We played at weddings, bar mitzvahs, school dances. We were making good money. We even played on WFIL, the 50,000 watt clear-channel station that broadcast from the ballroom of the Bellevue-Stratford. You could hear us all the way in Nebraska.”

Now it was my turn to refill my joe. I was back in a jiffy.

“So what happened,” I asked. “What happened to the band? You weren’t exactly Woody Herman and the Thundering Herd?”

The old man took a sip then laughed gently.

“We weren’t even Kay Kyser and his Kollege of Musical Knowledge.”

Now it was my turn to laugh.

“It was your father’s fault the band went belly-up,” Herb said. “Even though we practically named the group after him.”

“What was the name?” I realized I had forgotten to ask the obvious question.

“Herbs Last Stan. No apostrophe. Not a bad name considering everything.”

“Herbs Last Stan,” I repeated dumbly, as I do so often. 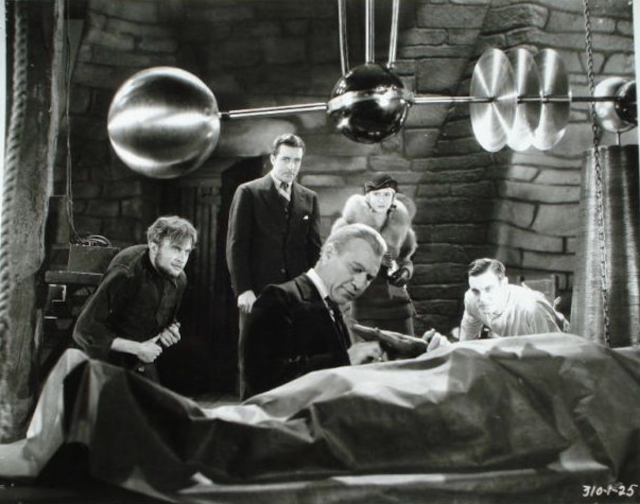 “A chanteuse?” I was pretty sure no one had used that word since Edith Piaf died in 1963.

“Yes, one Violet Klotz. A Philadelphia girl who had made it big in Hollywood in the early 30s—she was the vamp into whose face Jimmy Cagney crushed the grapefruit in “The Public Enemy.” Klotz was in “Frankenstein,” the top-grossing movie of 1931.”

“My father and Violet Klotz,” I sipped, “do tell.”

“You might have heard of her as Mae Clark. She was pushing 40 when your old man starting seeing her.”

“So how did my old man put the kibosh on Herbs Last Stan?”

“Well, to be blunt, though Violet had been something of a film star in the early days of the Silver Screen, she wasn’t exactly a singer. But of course, your father couldn’t see that. The fact is, Klotz had been going steadily downhill since 1931. And she didn't start that far up the mountain.”

“The heart wants what the heart wants.” He said. “He went for Klotz hook, line and form-fitting sateen gown. He saw Mae Clark as a film star, whereas the rest of us only saw 40-year-old Violet Klotz from 5253 Chestnut Street in West Philadelphia.”

“You can take the girl out of Philadelphia,” I said sagely.

“We loved your dad, so we just let the band go. The four Herbs went and got real jobs. As did your Dad. Violet, at the end of her life had a bit part on the old TV show, "F Troop."

“I guess you could call that bottoming out," I answered.

The old man padded once again to the kitchen. He washed out his cup and saucer and placed them gently in the expensive German dishwasher. Then he turned off the percolator.

"Nap time for me," he said, exiting the kitchen, and turning off the lights as he left.

I sat alone in the dark.