Guest Blogger Eric Soloway and The Pursuit of Misery

My friend and executive producer, Eric Soloway, who last wrote in this space back in September (with this post) has helped me out again. This time, Eric checks in from Buenos Aires.


I work in advertising. My job is to sell the pursuit of happiness and ideally the attainment of it. No matter what the product or service, the messaging must be relentlessly positive. I get it. Negativity doesn’t sell. But while working on a project in Buenos Aires, coincidentally during the G20 Summit, I was confronted with a wall mural that read in big colorful letters, “Existence is Misery”. No brand in their right mind would ever embrace this sentiment but seeing it in front of me like a billboard, an ad like object, what we ludicrously call an ADLOB, made an impact on me as much if not more than any branded billboard I’ve seen. The medium is the message after all. 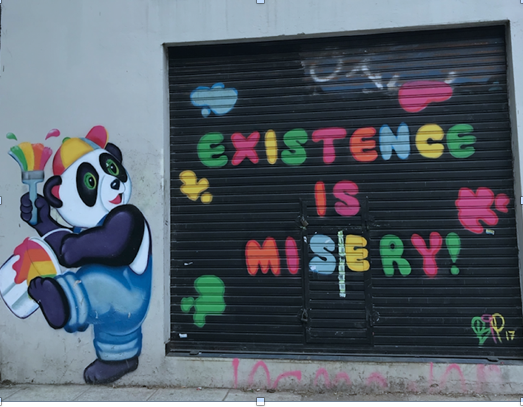 Americans don’t like to think about misery. And perhaps that’s our problem. We all think we have the right to be happy, even at the expense of someone else. Maybe that’s what’s driving us apart. But the Constitution doesn’t promise happiness, only the pursuit of it. There are frankly too many of us to all get a slice of happiness pie. However, there’s no shortage of misery. Think about it. Even those of us who claim to be happy all the time are one day closer to death with every mindful breath. Sorry, but every fabulous vacation, every organic vegan meal, every social post brings us an instant closer to our demise. Even millennials will one day perish.

So, what does capitalism teach us to do with a surplus of something? Sell it! Advertisers are always on the hunt for new ways to connect with consumers. Happiness is fake news. Misery is real. Misery breeds compassion. You’re never alone when you’re miserable. Isn’t that why misery loves company? Who doesn’t love a good gripe? People send money to disaster victims. Republicans and Democrats BOTH send money to hurricane victims. Never mind that the money rarely makes it to the right place. They send money in the name of misery! Some are even compelled to lend a hand themselves to perfect strangers. They bash their family, friends and neighbors for petty things but a stranger suffering misery somehow elicits sympathy and generosity across the board, especially if they have a puppy.

Think about the last funeral you attended. Did anyone make a joke in their eulogy? Did you cry and laugh simultaneously? The fact that you can feel a pang of joy even in your most sorrowful moment is what makes life beautiful. And it can go the other way too. When I first gazed at my newborn son, my joy was momentarily photo bombed with the thought that he will someday know pain, sorrow and eventually death. Ouch. This paradox of pleasure and pain is what makes us human. And it’s in this vulnerable place where we deeply connect with others. It’s where we put differences aside and truly embrace each other. It’s rock bottom. It’s where epiphanies happen. It’s where a shooting victim forgives the gunman. It’s where a former KKK member befriends a black man. Compared to this sorrowful bliss, happiness seems empty and one-dimensional. Misery is rich with nuance, wisdom and compassion.

I admit that “Existence is Misery” as a slogan sounds a bit Orwellian but what makes it different from Big Brother’s insidious propaganda is that it’s true. We are miserable and deep down we love it. We’re addicted to it. Let’s embrace it and see what happens. Maybe then we can be truly happy. But how can we make misery aspirational? Enter advertising. Let’s think of this Argentinian street art as a spec ad.

So, who can we sell it to? Who’s brave enough to put their logo on it? This is an idea that can not only shake things up for a brand in need but can create genuine social change, the proverbial campaign jackpot. It would get those already miserable haters and trolls to tweet a good-natured, “Touché”. Which brand most embodies our universal pursuit of misery? Which one connects nearly every human on the planet? Which brand has the reach and influence to unite us all in an instant? Are you thinking what I’m thinking?

What’s on your mind?  Existence is Misery.