Some wisdom from Norman Mailer. 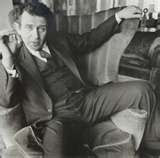 I am lucky enough to have been blessed with a peripatetic mind. I can take in a lot of information and know a lot of things and can make a lot of connections. Of course this upsets clients who prefer people who think in manner depicted by the directional chevrons you find in powerpoint and act as if the world were an orderly and logical place.

This morning I somewhat randomly picked up Norman Mailer's reportage of the 1968 Republican convention in Miami Beach. You can find all this in his book on the 1968 conventions, "Miami and the Siege of Chicago."

Here's a passage I particularly enjoyed. "Unless one knows him well, or has done a sizable work of preparation, it is next to useless to interview a politician. He has a mind which is accustomed to political questions. By the time he decides to run for President, he may have answered a million. Or at least this is true if he has been in politics for twenty years and has replied to an average of one hundred-fifty such queries a day, no uncharacteristic amount. To surprise a skillful politician with a question is then approximately equal in difficulty to hitting a professional boxer with a barroom hook."

I read a lot. From Virgil and Euripides to Maureen Dowd to body copy. Mailer's words above are some of the best I've stumbled across in a long time.
Posted by george tannenbaum at 10:55 AM

You are so right. About 10 years ago I was on a committee in my hometown of Oakland, CA to keep the A's from moving. The head of the committee was the mayor. He never attended one meeting.

On the morning of the press conference he came strolling in 30 seconds before it was to begin. One of his toadies handed him a briefing paper. He scanned it as he walked to the podium. He then conducted the press conference as if he had been intrumental in every decision and every accomplishment.
He fielded questions brilliantly. These people are amazing.

I remember we had a mock election in school when I was in third grade or so.
I was up for becoming the "President" and I was in the finals, up against a girl, a teacher's pet kind of girl. The last test before the voting we had to answer questions from our classmates. I lost when she like a true politician said:"I answer that question when I've become President". Which impressed the shit out of the class. The kids thought she sounded so professional. And so it goes.

As Harry Truman said, "An expert is an asshole from out of town."