Sometimes I think about Viktor Frankl. 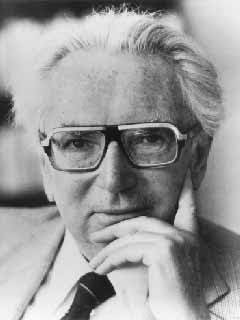 Viktor Frankl was one of the great psychological thinkers of the 20th Century. He was a Viennese Jew who survived Auschwitz and later went on to publish an extremely important book called "Man's Search for Meaning." It's worth reading.

After I read "Man's Search for Meaning," I read a continuation of his autobiography called "Recollections: An Autobiography."

Here's the bit that really got me:

In 1942, at the age of thirty-seven, less than one year after being married, Frankl was granted a visa from the United States Consulate in Vienna. Emigration to the United States would allow him to escape Nazi Europe. Frankl had waited years for the visa. Getting it meant he would be able to leave for America and continue his work.

The one thing that emigration would not allow him to do, however, was to help his family. He would have to leave them to fend for themselves in Vienna.

Frankl doesn't know what to do. He walks home during Kristallnacht--the state-provoked pogrom that destroyed thousands of Austrians synagogues and lead to scores of deaths. He walked through the embers of his local synagogue which had recently been desecrated and burned by the Nazis and while there picked up a shard from the marble depiction of the Ten Commandments. The shard contained one letter which Frankl realized was from the Talmudic imperative: “Honor thy father and mother.” The moment he saw the inscription, Frankl knew exactly what he had to do.

Within a few short months, he and his family were deported to the camps.

Working in an agency, when you keep it in perspective, isn't that bad.
Posted by george tannenbaum at 8:36 PM

logotherapy has kept me up several time.
And it has nothing to do with the size of the logo.