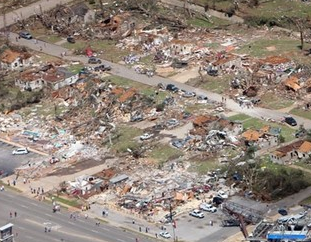 One of the things I noticed in the photographs from the tornado brooked devastation of the American south, is how many of the houses picked up and destroyed like children's toys were built without foundations.

In the wake of Modernista!'s closing this week it caused me to wonder how many agencies and how many ad campaigns were similarly built, without foundation.

There are advantages to building foundation-less homes. It's fast, cheap and who needs a basement anyway? But though these houses looked fine before the tornadoes struck, they were weak, vulnerable and not made to last.

I've worked in this business for 26 years. I've worked for 12 different agencies. Some had an ethos, a belief system, a way of doing things. However most work and most agencies seem to be built on following what's "hot" or "cool" at the moment. They don't get in and explore the fundamentals of their own brand or the brands they work on. They produce well-designed derivations of the things that won awards the year before.

Award-winning work more and more often seems to be based on quick, cheap jokes. Thoughtful, deep work, work built on the essence of a brand (not just on making a brand cool) is considered too ponderous. It's fallen out of favor.

Houses without foundations are fine when the weather is fair. Likewise agencies when the economy is strong.

What happens when the wind blows?
Posted by george tannenbaum at 10:37 AM

Work without foundation. I think the awards encourages it unfortunately. Like a sugar kick. No real nutrition, just a quick boost. The effect not lasting. Or worse, weakening the bones over time.

I chaired the guldagget (The Swedish d&ad/the one show) a few years ago. Gold went to a brilliant campaign that had won before and had been running for years. People booed. Because they wanted to see something NEW win. It's a brave and rare jury that dares to award real work that actually worked. In my mind, there wasn't any better work. That's why it won. And the campaign has continued being great. (ICA, by King.) The problem is that if an agency continues to do great work year after year but get punished by not wining anymore they will be tempted to change a great campaign because the industry tires of it. The importance and power of awards do that to great campaigns all too often.
Every agency ask for award winning talent. Not talent that knows a thing or two about communication. I've nothing against awards. Lot's of good in it. But it's like it is more important than results nowadays.

Modernista built without a foundation? George, agencies are deficit corporations. They live on contracts. What would a "foundation" look like?

Anonymous, but I naively believe an agency can be built on a set of principles and beliefs. A way of approaching work. Of getting to know a client's business. Of treating clients and employees. I believe these things--but that could be why I haven't been able to start my own shop.

No such thing as decline in culture, just shifts as society deems so, 'blame' can be places anywhere, no point ether way. 'language' is just physical means on communication, whats the difference in how it appears as long as the 'message' is convey?(none i find, speak to the deaf, and truly, their physical language in anchor for ideas/thoughts/intent only, words are as they are, meaningless).

i realize this topic is not really about foundations for a house, its a platforms for business(i get it, neat, a 'foundation). However, i make a point about foundations anyways(maybe still relevant in some metaphoric way).

there is no sense in foundations at that point, lots of places like this in the south also, to much water to have a hole in the ground not fill with such(as nature does, fill wholes with something).

Sometimes "human ingenuity" just causes issues, and the 'old methods' were that way for a reason. I know for a fact many a homes in oregon(especially as you get closer to the coast, and speaking strictly west of the cascades), are simply not in the geographic location to have a hole underneath their house, doing so would be silly.(how high is your water table? 2 foot down? we have foundations full of water from the start? sounds great, lets start crayfish farms and mushroom dens, we'll use the houses floorboards for growing the fungus....)

Modernista built without a foundation? George, agencies are deficit corporations. They live on contracts. What would a "foundation" look like?