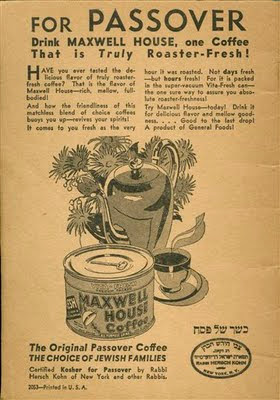 If you grew up in New York and you grew up Jewish, whether you knew it or not, you grew up with branded content. I'm talking specifically of the Passover Haggadah published and distributed since 1932 by Maxwell House coffee--with the exception of two years during World War II when paper was rationed. In 1923, Maxwell House was the first coffee to be certified Kosher and regards its distribution of Haggadah's (it's given away over 50 million--an average of more than four each to every Jew now on Earth) to be the longest-running promotion in advertising history.

At one time, every Jewish household--and when I was growing up Jews comprised about 25% of New York's population--had a dozen or so of the prayer books. And each of those gratis prayer books had a few pages of ads for Maxwell House coffee. This was no unholy alliance, nor was it a marriage of convenience. It was a service provided by the Maxwell House people and I'm sure it did more than a little to boost Maxwell House's sales in New York in its environs.

Before coffee went upscale, before there were Starbuck's on every corner, coffee was sold pre-ground in tins you picked up at the supermarket. There were literally dozens of brands, like Savarin, Chock Full o' Nuts, President's and the Haggadah gave Maxwell House a leg up.

Yesterday there was an article in the "Times" about the Maxwell House Haggadah, how it's being made over (the English translation, not the Biblical Hebrew) to modernize the language. God is no long "king." God is now a "monarch." And so on. You can read the Times' account here: http://www.nytimes.com/2011/04/09/nyregion/09haggadah.html?scp=1&sq=maxwell%20house&st=cse

I read the Times' article. I went to the Maxwell House website and though Maxwell House is now owned by a huge multi-national corporation and there's little chance that I'll actually buy any Maxwell House, I requested half a dozen of the Haggadahs. I'll let you know if they arrive.
Posted by george tannenbaum at 11:53 AM