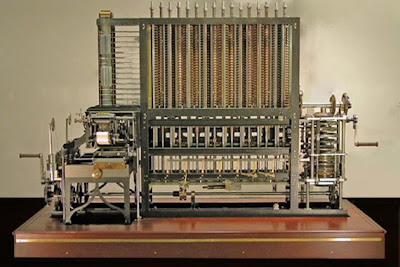 One of the baffling things about living in the information age is that the experts and the pundits have decided barely twenty years into it that they have figured it all out.

I am thinking about this as I slog my way through a new tome by James Gleick called "The Information, A History, A Theory, A Flood." This morning I was reading a chapter on Charles Babbage, the mathematician whose life was fairly consumed by trying to invent a steam-powered mechanical calculating machine.

The internet, our current technological marvel is not all that different from Babbage's mechanics. We are told endlessly that the internet will change everything. But, to me, everything seems pretty much the same. I still can't get an answer to a problem. I still can't get help from customer service. The big advantages, for me, are I have access to more books, but I still prefer going to my neighborhood independent bookseller that employs people who can actually read. Browsing online is not nearly as interesting (and it takes more time) than browsing in-person.

Finally, and what really set me off this morning, is the utter conviction in the assertions of the experts that the internet is a visual medium. How would you know this early into its development? It's too early to say anything about the internet with conviction. Except that its ubiquity will rise.

And how would you explain that the internet's most popular sites, Google, Facebook, Craig's List and Amazon are essentially information and word driven?
Posted by george tannenbaum at 8:55 AM

That's an interesting point, George. You could argue that the Internet is a visual (YouTube, Flikr), aural (YouTube, iTunes), *and* text-based medium. Maybe it's a "multi-media medium"? Perhaps the first content delivery system that isn't so strictly defined by the content it is delivering?