Some thoughts on the past and the future.

The economy and our industry seem mired waist deep in Big Muddy, to pilfer a phrase from the Vietnam era. Unemployment, cupidity and stupidity remain high. But nonetheless, we slog on.

I am reading right now, speaking of slogs, Steven Pinker's tome "The Better Angels of Our Nature, Why Violence Has Declined." It's an amazing book. It's generated reams of debate and discussion. It's been named a "New York Times" notable book of 2011 and from what I gather from my bookish friends, is an early favorite for one of the big prizes--a Pulitzer (Pinker has twice been a finalist) or even a National Book Award. You can read a fairly recent book review here. That is, if you're still awake and reading this: http://www.nytimes.com/2011/10/09/books/review/the-better-angels-of-our-nature-by-steven-pinker-book-review.html?scp=7&sq=steven%20pinker&st=cse

Pinker's point in all this is that the world is actually getting better. Less violent. More liberal. More livable. Fairer.

He backs up this seemingly preposterous assertion with oceans of data, charts and graphs up the yingyang and a logic that even my harridan of a mother couldn't unravel.

Most thinking people would agree that over the last 50 years or so, our economy has transformed from one in which we made "stuff" to one in which we make "information." The great five-mile-long assembly lines of the Willow Run Ford plant (that saved democracy it can be argued by producing a B-24 bomber every hour) are closed. The outskirts of just about every major city in America are girded with shuttered factories and abandoned warehouses. Waste paper, I'm told, is America's largest export.

The same trend has afflicted the ad industry. From a highpoint in the 60s and declining since then, the ad industry made "stuff." We made TV commercials and print ads and radio spots. We made the billboards that dotted American roadways. We produced, aired, printed, propagated, promulgated. 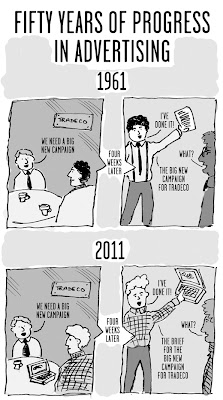 Then, as manufacturing stuff declined, we switched to generating "information." Meetings grew in importance. Decks became our shibboleth. Planning became our product. Clients paid for this. But increasingly questioned what they were buying. How did a deck, or a meeting or a "strategy" advance their ball?


As you might expect from a cockeyed optimist like me, there are glimmers of hope. Manufacturing is rebounding in the States. Factories--albeit ones run by robots--are slowly being built. Old ones are being reclaimed and repurposed. It's not "morning again in America" but by fits and starts, we are beginning to understand that as a nation you can't just be a pontificator. You have to make stuff.

Perhaps we will see a resurgence of "stuffiness" return to advertising, too. A premium placed not on what you say or "deck" but on what agencies make or do.

Maybe the pendulum is beginning to swing back from theory to practice.

Maybe we will find a proper heading again.

--
Thanks to my 10101101 friends at Sell! Sell! for the wonderful cartoon pasted above. Theirs is an excellent blog.

http://sellsellblog.blogspot.com/2011/12/fifty-years-of-progress-in-advertising.html
--
And here's to a "Stuffy" New Year. If we make stuff, it will be a Happy one.
Posted by george tannenbaum at 9:12 AM

Watching nail bombs exploding in Syria would seem to puncture your argument.

Great post, and thanks for the mention George. Glad you like the cartoon, and blog - much appreciated. Hope 2012 is a great one for you.

I like this concept. I visited your blog for the first time and just been your fan. Keep posting as I am gonna come to read it everyday!!

The book hasn't been universally hailed as a masterpiece. Sex trade, terrorism, crackdowns in the middle east, the Balkans, Rwanda...Amnesty International and Medecins sans Frontiere would disagree with you.

But thx for being unafraid to express your opinion